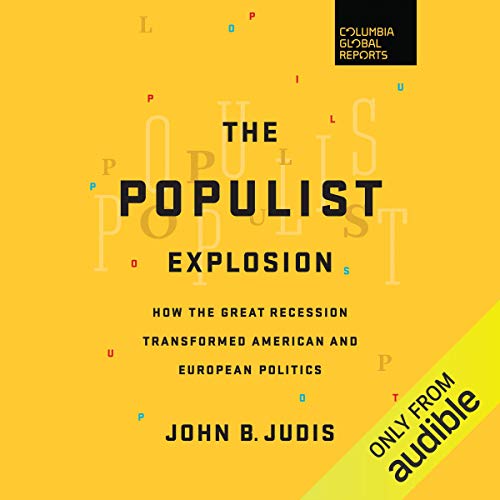 What's happening in global politics? As if overnight, many Democrats revolted and passionately backed a socialist named Bernie Sanders; the United Kingdom voted to leave the European Union; the vituperative billionaire Donald Trump became the presidential nominee of the Republican party; and a slew of rebellious parties continued to win elections in Switzerland, Norway, Italy, Austria, and Greece.

John B. Judis, one of America's most respected political analysts, tells us why we need to learn about the populist movement that began in the United States in the 1890s, the politics of which have recurred on both sides of the Atlantic ever since. Populism, on both the right and the left, champions the people against an establishment, based on issues - globalization, free trade, immigration - on which there has been a strong elite consensus, but also a strong mass discontent that is now breaking out into the open.

The Populist Explosion is essential listening for our times as we grapple to understand the political forces at work here and in Europe.

"Far and away the most incisive examination of the central development in contemporary politics: the rise of populism on both the right and the left. Superb." (Thomas Edsall, New York Times columnist)

Concise overview, but should be read with care

John Judis has given an interesting and concise overview of the development of populist parties and movements in the US and Europe and of the reasons for their rise. Nevertheless, I was missing a more critical discussion about the methods of populist to gain their supporters. According to Judis, populist parties channel actual problems that are not addressed by the governing establishment. I would say this is the reason for most new political movements, which doesn't make them necessarily populistic. Populists usually instil fears and prejudices to evoke a public feeling of menace. They simplify complicate issues and they provide apparently simple (or no) solutions. Nevertheless or even because of this, they are appealing to an increasing number of people. Unfortunately, this specific aspect of populism wasn't addressed at all. By that , populist parties have been considered by Judis as any other political movement and their potential danger for democracy is belittled. Sometimes I had the feeling the author tries to give them a theoretical justification. This is just an unproven assumption, however, work should be assessed with care at least.

The speaker, by the way, rushes through the text ad being on the run.