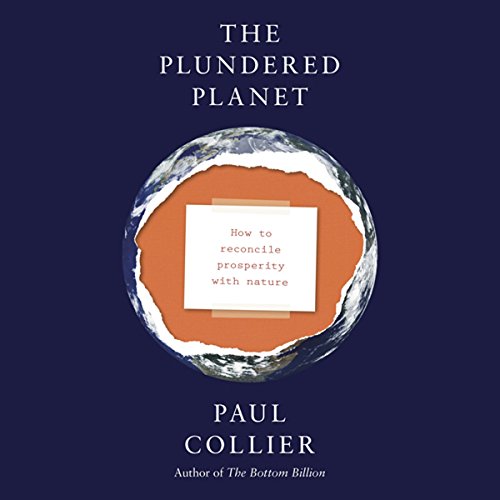 Paul Collier's The Bottom Billion was greeted as groundbreaking when it appeared in 2007, winning the Estoril Distinguished Book Prize, the Arthur Ross Book Award, and the Lionel Gelber Prize. The Economist wrote that it was "set to become a classic", the Financial Times praised it as "rich in both analysis and recommendations", while Nicholas Kristof of the New York Times called it the "best nonfiction book so far this year."

Now, in The Plundered Planet, Collier builds upon his renowned work on developing countries and the poorest populations to confront the global mismanagement of nature.

Proper stewardship of natural assets and liabilities is a matter of planetary urgency: natural resources have the potential either to transform the poorest countries or to tear them apart, while the carbon emissions and agricultural follies of the rich world could further impoverish them. The Plundered Planet charts a course between unchecked profiteering on the one hand and environmental romanticism on the other to offer realistic and sustainable solutions to dauntingly complex issues. Grounded in a belief in the power of informed citizens, Collier proposes a series of international standards that would help poor countries rich in natural assets better manage those resources, policy changes that would raise world food supply, and a clear-headed approach to climate change that acknowledges the benefits of industrialization while addressing the need for alternatives to carbon trading. Revealing how these are all interconnected, The Plundered Planet charts a way forward to avoid the mismanagement of the natural world that threatens our future.

"In this path-breaking book, Paul Collier develops one of the most fascinating subjects he touched on in The Bottom Billion - the resource curse. It will be of great interest to all those who are concerned about the future of our civilization." (George Soros)
"Collier's arguments are compassionate and convincing, and his straightforward explanations of economic principles are leavened with humor and impressively accessible." ( Publishers Weekly)