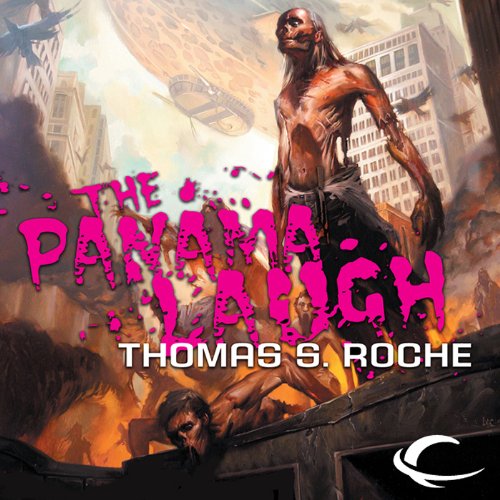 Dante Bogart knows that he is partially responsible for the plague of laughing zombies destroying humanity, and in spite of the best efforts by the people he used to trust, he is going to do everything it takes to stop them. Thomas S. Roche's zombie apocalypse tale is a pulpy delight elevated by the phenomenal performance of Andy Caploe, whose gritty conviction to the scenario elevates Dante as a gruff, embattled hero. Caploe's bravado enhances the drama and subversive wit in The Panama Laugh, a riotous, entertaining story of retribution and revenge.

Ex-mercenary, pirate, and gun-runner Dante Bogart knows he's screwed the pooch after he hands one of his shady employers a biological weapon that made the dead rise from their graves, laugh like hyenas, and feast upon the living. Dante tried to blow the whistle via a tell-all video that went viral - but that was before the black ops boys deep-sixed him at a secret interrogation site on the Panama-Colombia border. When Dante wakes up in the jungle with the five intervening years missing from his memory, he knows he's got to do something about the laughing sickness that has caused a world-wide slaughter.

The resulting journey leads him across the nightmare that was the Panama Canal, around Cape Horn in a hijacked nuclear warship, to San Francisco's mission district, where a crew of survivalist hackers have holed up in the pseudo-Moorish-castle turned porn-studio known as The Armory. This mixed band of anti-social rejects has taken Dante's whistle blowing video as an underground gospel, leading the fight against the laughing corpses and the corporate stooges who've tried to profit from the slaughter. Can Dante find redemption and save civilization?