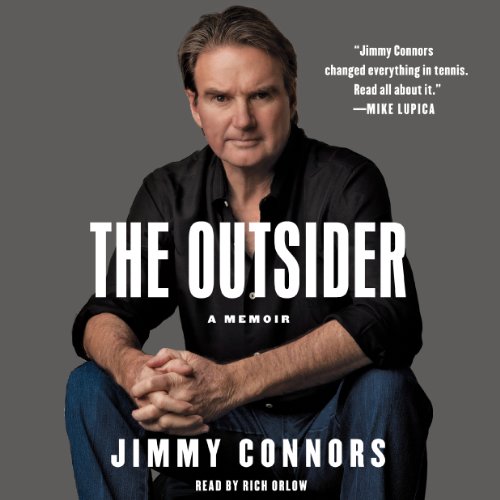 Jimmy Connors is a working-man's hero, a people's champion who could tear the cover off a tennis ball, just as he tore the cover off the country-club gentility of his sport. A renegade from the wrong side of the tracks, Connors broke the rules with a radically aggressive style of play and bad-boy antics that turned his matches into prizefights. In 1974 alone, he won 95 out of 99 matches, all of them while wearing the same white shorts he washed in the sink of his hotel bathrooms. Though he lived the rock star life away from tennis, his enduring dedication to his craft earned him eight Grand Slam singles titles and kept him among the top ten best players in the world for sixteen straight years - five at number one.

In The Outsider, Connors tells the complete, uncensored story of his life and career, setting the record straight about his formidable mother, Gloria; his very public romance with America's sweetheart Chris Evert; his famous opponents, including Björn Borg, John McEnroe, Arthur Ashe, Ivan Lendl, and Rod Laver; his irrepressible co-conspirators Ilie Nastase and Vitas Gerulaitis; and his young nemesis Andre Agassi. Connors reveals how his issues with obsessive-compulsive disorder, dyslexia, gambling, and women at various times threatened to derail his career and his long-lasting marriage to Playboy Playmate Patti McGuire.

Presiding over an era that saw tennis attract a new breed of passionate fans - from cops to tycoons - Connors transformed the game forever with his two-handed backhand, his two-fisted lifestyle, and his epic rivalries.

The Outsider is a grand slam of a memoir written by a man once again at the top of his game - as feisty, unvarnished, and defiant as ever.