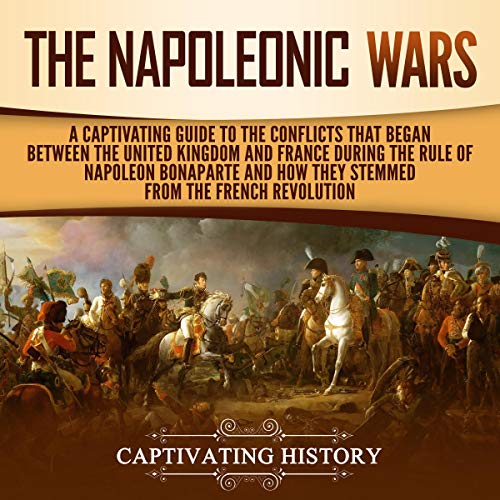 If you want to discover the captivating history of the Napoleonic Wars, then keep reading...

The Napoleonic Wars, which took place between 1803 and 1815, were spearheaded by probably France’s best tactician and military strategist to date: General Napoleon Bonaparte. His tactics and strategies were so grounded that it has served as the basis for many major warfare campaigns and maneuvers, both during his lifetime as well as after his demise. Even France’s sworn enemy for most of the medieval era, the British, acknowledged his ingenuity despite his ultimate defeat at the hands of the British army at the end of life.

In this audiobook, we will take an interesting journey through the annals of history to inspect the Napoleonic Wars - why they started in the first place, a glimpse into the life of the legendary commander Napoleon Bonaparte, the course of events and some of the major players on the board, and the stories of the last glimmer of France’s military greatness.

While the French Army did play a crucial role in both the World Wars, they pale in comparison to the army of France, which was led by one of the most brilliant military minds in history, during the country’s last great military campaign against its greatest rival: Britain.

In this captivating book on the Napoleonic Wars and the French Revolution, we will examine Napoleon’s role in the war - not only as a military genius but also as a politician, ruler, and social reformer, and, perhaps, uncover some of the more dubious aspects of the legend that is Napoleon Bonaparte.

In The Napoleonic Wars: A Captivating Guide to the Conflicts That Began Between the United Kingdom and France During the Rule of Napoleon Bonaparte and How They Stemmed from the French Revolution, you will discover chapters, such as:

So, if you want to learn more about the Napoleonic Wars, scroll up and click the "buy now" button!