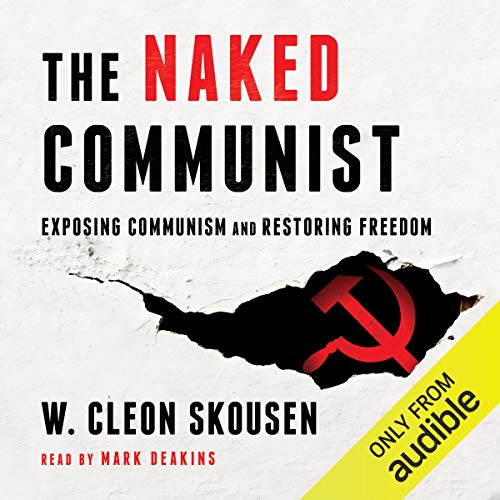 A timely update to the phenomenal national bestseller.

Soon after its quiet release during the height of the Red Scare in 1958, The Naked Communist: Exposing Communism and Restoring Freedom exploded in popularity, selling almost two million copies to date and finding its way into the libraries of the CIA, the FBI, the White House, and homes all across the United States. From the tragic falls of China, Korea, Russia, and the UN, to the fascinating histories of Alger Hiss, Whittaker Chambers, Elizabeth Bentley, and General MacArthur, The Naked Communist lays out the entire graphic story of communism, its past, present, and future.

After searching unsuccessfully for a concise literature on the communist threat, W. Cleon Skousen saw the urgent need for a comprehensive book that could guide the American conversation. So he distilled his FBI experience, decades of research, and more than one hundred communist books and treatises into one clarifying, readable volume that became a touchstone of American values and earned praise from the likes of President Ronald Reagan, Glenn Beck, and Ben Carson. Lauded by one reviewer as “the most powerful book on communism since J. Edgar Hoover’s Masters of Deceit,” this text draws a detailed picture of the communist as he sees himself: stripped of propaganda and pretense. Readers gain a unique insight into the inner workings of communism - its appeal, its history, its basic and unchanging concepts, even its secret timetable of conquest.

Among the many questions The Naked Communist answers are:

* Who gave the United States’ nuclear secrets to the Russians?* How did the FBI fight communism after it was forced underground in 1918?* Why did the West lose 600 million allies after World War II? * What really happened in Korea?* What is communism’s great secret weapon?* What lies ahead?* What can I do to stop communism? * How can we fight communism without a major war?

Now updated for 2017, this edition includes a chapter on the forty-five Communist Goals, detailing how forty-four of those goals have been achieved in the U.S. already, as well as a chapter on the making of The Naked Communist, shedding light on how this book has sold almost two million copies. As relevant now as it was sixty years ago, Skousen’s groundbreaking work provides a renewed understanding of one of the greatest threats facing America today.

“The Naked Communist lays out the whole progressive plan. It is unbelievable how fast it has been achieved.” - Dr. Ben Carson ( The Sean Hannity Show; May 23, 2014)
“No one is better qualified to discuss the threat to this nation from communism. You will be alarmed, you will be informed, and you’ll be glad you heard him.” - President Ronald Reagan
“I went back and I read The Naked Communist, and at the end of that, Skousen predicted [that] someday soon you won’t be able to find the truth in schools or in libraries or anywhere else because it won’t be in print anymore. So you must collect those books. It’s an idea I read from Cleon Skousen from his book in the 1950s, The Naked Communist, where he talked about [how] someday the history of this country’s going to be lost because it’s going to be hijacked by intellectuals and communists and everything else. And I think we’re there.” - Glenn Beck, host of the nationally syndicated Glenn Beck Radio Program