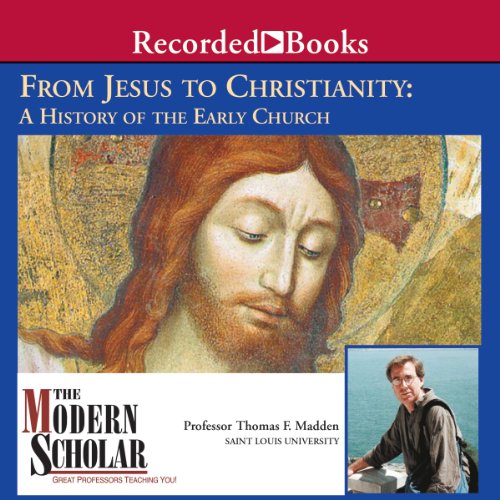 The Modern Scholar: From Jesus to Christianity: A History of the Early Church

Entrusting the apostles to continue the work he had started by instructing them to "Go therefore and make disciples of all nations, baptizing them in the name of the Father, the Son and the Holy Spirit . . .," Jesus kindled the fires of a new religion in a world largely dominated by polytheism, cult leader worship, and mysticism. In the first century of its existence, Christianity was both welcomed and vilified throughout the Roman Empire. Many of Christianity's original adherents were martyred - murdered by those who believed it a danger to their authority or, at the very least, the cause of unrest among an otherwise docile populace.

Christians themselves practiced their religion with great diversity, linked as much to local influences as theology. Political intrigue, theological beliefs, and simple misunderstandings created a need for dialogue between the many practitioners of the growing faith.

Christianity's adoption as the official faith of the Roman state tied it inexorably to the fortunes of the Empire. This also helped to create a gulf between the two main theological branches of the religion, which remain to this day.

Das sagen andere Hörer zu The Modern Scholar: From Jesus to Christianity: A History of the Early Church