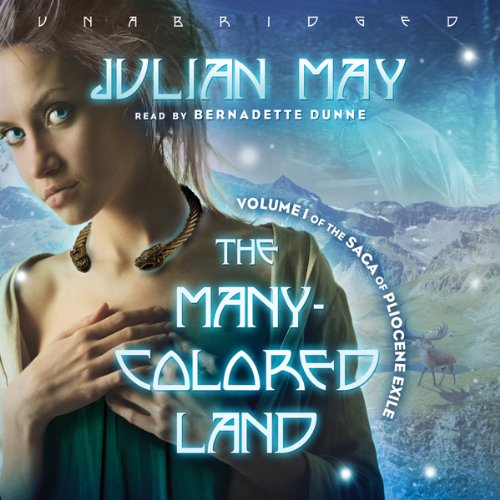 This is a spellbinding tale woven of equal parts epic and myth - with a liberal dash of hard science fiction.

When a one-way time tunnel to Earth’s distant past, specifically six million B.C., was discovered by folks on the Galactic Milieu, every misfit for light-years around hurried to pass through it. Each sought his own brand of happiness. But none could have guessed what awaited them. Not even in a million years.

In the early 22nd century, many humans are being born with psychic powers and are linked in a single galactic mind. Those without these psychic powers - the misfits, undesirables, criminals, and radicals - have a choice: mental reprogramming or exile. Exile, voluntary or otherwise, takes them back six million years, to a time between the extinction of dinosaurs and the rise of Homo sapiens, and to a time of exotic surprises and unknown dangers.

Julian May lives in Washington state and has been writing science fiction and fantasy for more than 30 years.

“ The Many-Colored Land…takes readers on an amazing journey from the distant future to the distant past, using unexpected routes all along the way…A tremendously original premise; fast-paced storytelling that defies predictability; and a sympathetic and well-rendered cast of characters.” (SFReviews.net)
“The Many-Colored Land is the first volume of one of the most impressive science fiction series I have read.” (Reviewers-choice.com)

A journey back in time with Julian May

This book was a journey back in time, not only with regard to the story itself, but for me since it was my favorite sci-fi series in the 80's.

Recently I donated hundreds of books to the local library, but kept the books of this series to re-read. I discovered that the first volume (The Many-Colored Land) was missing and was delighted to discover that it was available from Audible.

On Audible.com several reviewers criticize the narrator, Bernadette Dunne, but I can't agree with their assessment. I experienced her reading as being clearly enunciated and non-distracting. She made different characters recognizable by their voices, but she didn't overdo it in my opinion. All in all, I was very satisfied with the narration. The only pronunciation of the narrator that slightly bothered me was the word &quot;milieu&quot;, which wasn't pronounced in French, as I had always imagined it when reading the books.

It is a shame that the series is out-of-print and that many new readers won't be able to enjoy it. It seems that the publishers have doomed the series to die. The entire series is not available to purchase in book form except as a used book. According to reviews, the book was apparently very poorly digitized and got poor reviews even by fans of the series, so new readers will be frightened off from the digital version by the reviews. In my opinion, the Audible version of the first volume is good, but what new reader wants to start a series that isn't continued? And why should further volumes be recorded when the available digital version is getting poor reviews? It is a Catch 22 situation.

With regard to the story itself, I still feel that it is one of the best ever written in this genre. I am amazed that it didn't become as famous as the works of C.S. Lewis. In my opinion, Julian May did a fantastic job bringing the characters to life, and it is a tribute to this series that I still recall the characters today after not reading the series since 30 years ago.

Today I took the next book in the series, &quot;The Golden Torc&quot; off my shelf and dusted it off. I am looking forward to my bedtime reading tonight.

a great story beautifully read. would love to hear the other books in the saga but they don't appear in the library