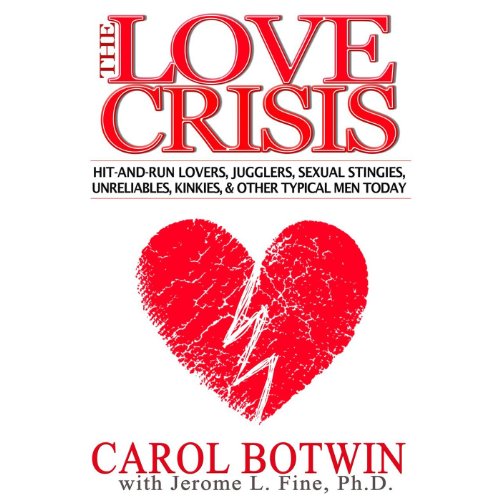 "What is wrong with men today?" That is the question the 27 million single, separated, and divorced women in this country ask themselves again and again. Married women sometimes wonder too. This is the book they’ve all been waiting for. The Love Crisis is a field guide to the contemporary male. Women define the Love Crisis through complaints about skittish men who play destructive games with them or who are unable to make commitments.

Written with wit, expertise, and authority by a female journalist with a male clinical psychologist, The Love Crisis categorizes men according to how they behave in relationships and describes the psychodynamics of typical lovers and husbands today. You’ll recognize Hit-and-Run Lovers ("A proliferating breed of men who score and soon after disappear"), Jugglers ("Their addiction is to ongoing relationships - several at once"), Sexually Stingy Lovers ("A variety of excuses and ploys are used to avoid sex. Most commonly heard is the complaint, 'I’m tired'"), Just-So-Far Lovers ("They cannot, they will not, take the plunge"). There are also Bastards, Kinkies, Fastidious and Urge-to-Merge Lovers - 21 types in all. A chapter on the Normal Man will help the reader recognize that rare but delightful creature. Also included is a discussion of how society contributes to the Love Crisis, and an appendix on "How to Spot a Loser Lover."

A bold, lighthearted yet serious call to romantic arms, this book will help both men and women understand and overcome the increasing difficulties they face in finding love today.

Carol Botwin has written about human behavior, sex, and other topics for such publications as The New York Times Magazine, Family Circle, and Redbook.

Dr. Jerome L. Fine is a clinical psychologist connected with the William A. White Institute of Psychoanalysis and Mount Sinai Hospital in New York City.