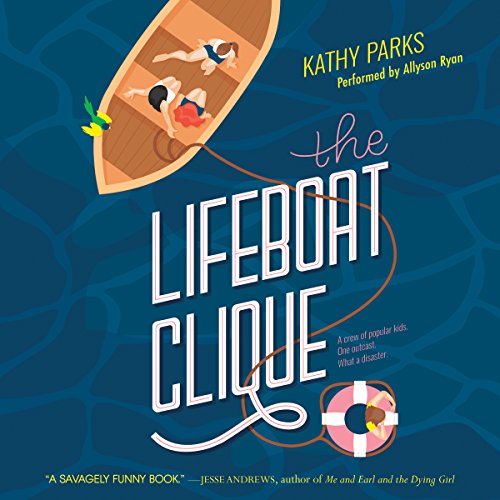 Mean Girls meets Life of Pi in this darkly humorous, compulsively listenable teen novel that's perfect for fans of Libba Bray and Andrew Smith. A hilariously dark and twisted story that sparkles with a remarkably fresh voice, The Lifeboat Clique is Kathy Parks' irreverent yet insightful novel about how to survive in the most unthinkable circumstances.

Some people might say that Denver has a death wish. Why else would she dare to sneak into a Malibu beach party where she'd be surrounded by enemies?

Oh yeah. Croix. Denver never thought in a million years he'd ask her out, but who is she to question this miracle of fate?

Well, that isn't the only surprise fate has in store.

During the party a tsunami hits the coast of California, and Denver and a handful of others escape death and are swept out to sea. Of course, one of her fellow castaways is none other than her ex-BFF, Abigail, who can barely stand the sight of her.

Trapped on a small boat with the most popular kids in school and waiting to be rescued, Denver wonders what might kill her first - dehydration, sunstroke, or the girl she used to think of as a sister?