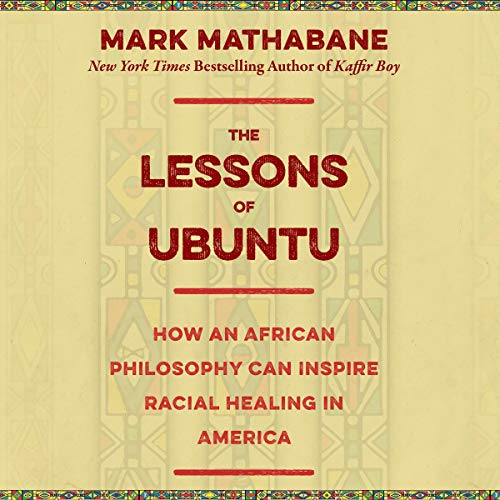 The Lessons of Ubuntu

Mark Mathabane touched the hearts of millions with his sensational memoir, Kaffir Boy,. A book highly-praised by Oprah and President Clinton for inspiring hope, Kaffir Boy described the effects of South Africa's system of legalized racism and oppression on black lives in vivid prose. The book won the prestigious Christopher Award, was a finalist for the Robert F. Kennedy award, rose to #3 on The New York Times bestsellers list, and to #1 on the Washington Post list. It is required reading in schools across the country. In his latest book The Language of Ubuntu, Mathabane uses his experiences with race in both South Africa and in America, where he has lived for the past thirty-seven years, to provide a fresh, timely, and provocative approach to the search for solutions to this country's number one and most intractable social problem.

Mathabane argues that the reason many Americans are turned off by the current divisive racial dialogue is because the discussion has mostly been about the politics of race and avoids the elephant in the room - - what each of us can do to become agents for racial healing. His solution is for people to learn to speak the language of Ubuntu, a Zulu word for common humanity. Mathabane shows how Nelson Mandela used such language to rally blacks and whites to abolish apartheid peacefully; and how Dr. King did the same thing for African Americans during the Civil Rights Movement in the battle to eradicate Jim Crow.

With race dominating the news during the 2016 Presidential election, in the wake of the killing of black men by the police, and growing protests on college and university campuses, Mathabane challenges both blacks and whites to use the language of Ubuntu to overcome the stereotypes, half-truths, misconceptions, and mistaken beliefs they have of each other so they can connect as human beings to achieve racial healing. Without this human connection, Mathabane argues, the racial divide will only get worse and make lasting solutions virtually impossible.