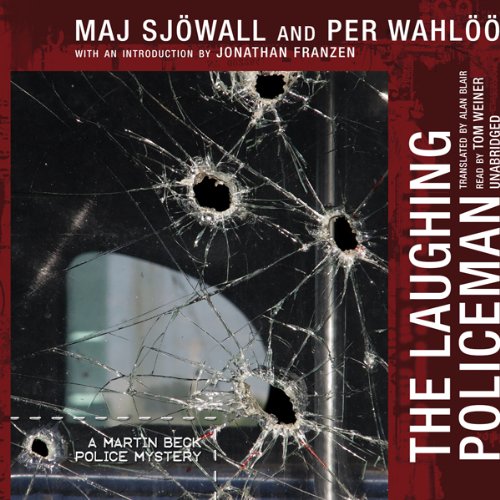 Sweden in November, 1967. Freezing rains howl, while blackness blots out Stockholm by three in the afternoon. Superintendent Martin Beck slogs through another murder investigation with clammy socks and lashing stomach ulcer, conditions "not improved by his drinking cocoa in the kitchen with his daughter".

Despite grim bones, The Laughing Policeman mostly tracks as an acidically funny, chewy tangle of suspense framed by moral decrees on nymphomania, corruption, Ritalina pep pills, and the Vietnam War. Per Wahlöö and Maj Sjöwall are the husband and wife crime novelists behind the 10-volume Martin Beck series. The Laughing Policeman is audiobook four. No need to download sequentially though. These are sturdy enough to stand alone as individually realized thrillers.

in this installment, homicide detectives Beck and Lennart Kollberg puzzle out why nine strangers, including an ambitious rookie from their own squad, were gunned down on a red double-decker bus in Stockholm. Neither Beck nor cynical, plump Kollberg are reverential about the gumshoe grind, which lends The Laughing Policeman authentic hum as a police procedural. Wahlöö and Sjöwall reveal ingenuity in plotting both old and new murders. Their quirky gang is orderly and methodical in chasing leads; ruling out suspects; exposing long-buried secrets; and generally picking away at clues until, finally, a hunch pays off.

The Laughing Policeman is atmospheric and briny as narrated by Tom Weiner, who deftly shifts between regional Swedish dialects without plunging into farce. Beck's interior weariness can strain Weiner. At times he cakes on a ragged fatigue, transmitting Beck as Hamlet. Weiner also lumbers as Åsa Torell, the brittle fiancée of the murdered rookie. He waters down her moody rages of dialogue into a whispery purr, so when Åsa shrieks at Kollberg, "Go to the devil!", it's like he's sucking a caramel. The shadowy Kollberg is Weiner's sweet spot, and he teases out the newlywed detective's lust for his wife, Gun, with a pleading, gravelly tug in his throat. Välkommen to love, Aquavit, and moody vapors. Nita Rao

On a cold and rainy Stockholm night, nine bus riders are gunned down by an unknown assassin. The press, anxious for an explanation for the seemingly random crime, quickly dubs him a madman. But Superintendent Martin Beck of the Stockholm Homicide Squad suspects otherwise. This apparently motiveless killer has managed to target one of Beck's best detectives - and he, surely, would not have been riding that lethal bus without a reason.
©1998 Random House (P)2009 Blackstone Audio, Inc.