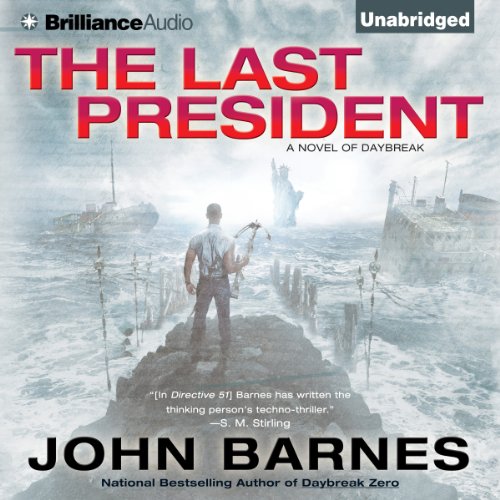 An author who "excels at combining the tension of the chase with the elements of science fiction," (Rocky Mountain News), John Barnes delivered a fascinating and frightening scenario about the collapse of America's political and social infrastructure following the destruction of modern technology. Now, the author of Directive 51 and Daybreak Zero continues his story of the wild post-apocalyptic frontier - and humanity's last desperate attempt to re-civilize their world….

For more than a year, Heather O'Grainne and her small band of heroes, operating out of Pueblo, Colorado, have struggled to pull the United States back together after it shattered under the impact of the event known as Daybreak. Now they are poised to bring the three or four biggest remaining pieces together, with a real President and Congress, under the full Constitution again. Heather is very close to fulfilling her oath, creating a safe haven for civilization to be reborn.

But other forces are rising too.

In a devastated, splintered, post-apocalyptic United States, with technology thrown back to biplanes, black powder, and steam trains, a tiny band of visionaries struggles to re-create Constitutional government and civilization itself, as a new Dark Age takes shape around them.