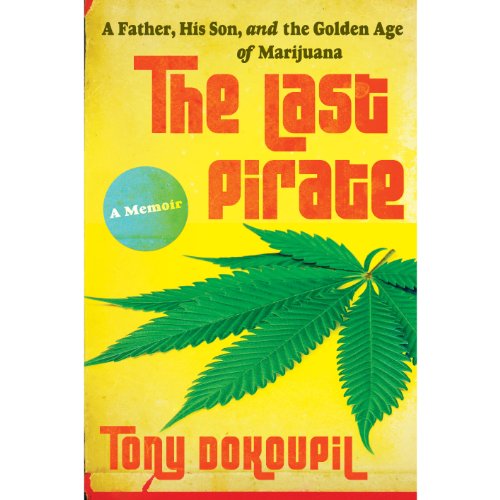 In the tradition of Blow and Another Bullshit Night in Suck City, The Last Pirate is a vivid, haunting, and often hilarious memoir recounting the life of Big Tony, a family man who joined the biggest pot ring of the Reagan era and exploded his life in the process. Three decades later, his son came back to put together the pieces.

As he relates his father’s rise from hey-man hippie dealer to multi-ton smuggler extraordinaire, Tony Dokoupil tells the larger history of marijuana and untangles the controversies still stirring furious debate today. He blends superb reportage with searing personal memories, presenting a probing chronicle of pot-smoking, drug-taking America from the perspective of the generation that grew up in the aftermath of the Great Stoned Age. Back then, everyone knew a drug dealer. The Last Pirate is the story of what happened to one of them, to his family, and in a pharmacological sense, to us all.

The Last Pirate is a cultural portrait of marijuana’s endless allure set against the Technicolor backdrop of South Florida in the era of Miami Vice. It’s a public saga complete with a real pirate’s booty: more than a million dollars lost, buried, or stolen - but it’s also a deeply personal pursuit, the product of a son’s determination to replant the family tree in richer soil.

"NBC News senior writer Dokoupil offers a gripping examination of his longtime marijuana-dealing father, as well as a researched look at the evolution of American narcotics laws.… Dokoupil’s sharp eye for detail makes for a lively and often moving narrative full of cinematic scenes and snappy dialogue. Dokoupil draws on his experience as a reporter to deliver an unflinching and detailed look at a criminal family’s life." ( Publisher’s Weekly)
"There is a pseudoheroic, merry-band-of-pirates tone to these often-hilarious adventures in the drug business during the Reagan era. Dokoupil recounts how the smuggling and distribution business ran and contextualizes it within the 'Great Stoned Age'. Partly the history of a generation, yet very much a family story…though there are no heroes, readers owe the author thanks for this well-told, ironic, and gripping story." ( Booklist)