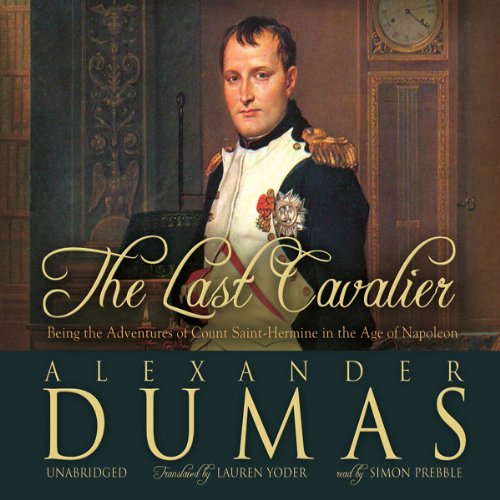 The story of France from the Renaissance to the 19th century, as Dumas vibrantly retold it in his numerous enormously popular novels, has long been absent one vital, richly historical era: the Age of Napoleon. But no longer. Now dynamically, in a tale of family honor and undying vengeance, of high adventure and heroic derring-do, The Last Cavalier fills that gap.

The last cavalier is Count de Sainte-Hermine, Hector, whose elder brothers and father have fought and died for the Royalist cause during the French Revolution. For three years Hector has been languishing in prison when, in 1804, on the eve of Napoleon's coronation as emperor of France, he learns what is to be his due. Stripped of his title, denied the honour of his family name as well as the hand of the woman he loves, he is freed by Napoleon on the condition that he serve in the imperial forces. So it is in profound despair that Hector embarks on a succession of daring escapades as he courts death fearlessly. Yet again and again he wins glory, against brigands, bandits, the British, boa constrictors, sharks, tigers and crocodiles. At the Battle of Trafalgar, it is Hector's bullet that fells Nelson. But however far his adventures take him, from Burma's jungles to the wilds of Ireland, his destiny lies always with his father's enemy, Napoleon.

It is rousing, big spirited, its action sweeping across oceans and continents, its hero gloriously indomitable. This newly discovered last novel of Alexandre Dumas, lost for 125 years in the archives of the National Library in Paris, completes the Dumas oeuvre.
"Absolutely wonderful....Alexandre Dumas remains, now as ever, the Napoleon of storytellers." - ( Washington Post)
"James Bond, Indiana Jones, and many others owe a deep debt to Dumas, who stuffs his tales with thrilling exploits and exotic locales. No one with a pulse will be able to resist Dumas's lost classic." ( Christian Science Monitor)

The best of Dumas

I find this work to be the best of Dumas, even better than the count of monte cristo