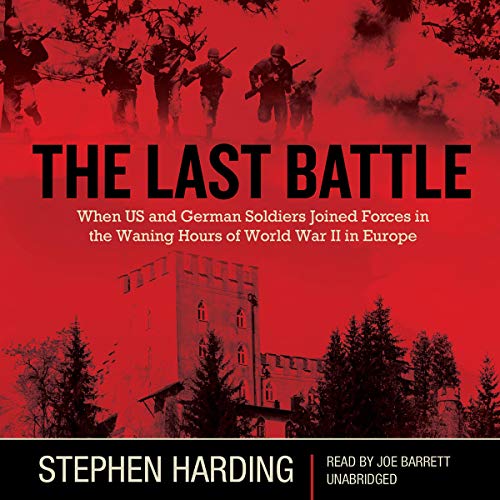 May 1945. Hitler is dead, and the Third Reich is little more than smoking rubble. No GI wants to be the last man killed in action against the Nazis. But for cigar-chewing, rough-talking, hard-drinking, hard-charging Captain Jack Lee and his men, there is one more mission: rescue 14 prominent French prisoners held in an SS-guarded castle high in the Austrian Alps. It's a dangerous mission, but Lee has help from a decorated German Wehrmacht officer and his men, who voluntarily join the fight.

Based on personal memoirs, author interviews, and official American, German, and French histories, The Last Battle is the nearly unbelievable story of the most improbable battle of World War II - a tale of unlikely allies, bravery, cowardice, and desperate combat between implacable enemies.

Who is Toyoda iike?

Though it might sound funny: Even as a native German speaker it was not easy to understand the German names of people, cities and military terms, because the narrator butchers many of them beyond recognition.
For example I was stunned to hear a man named "Toyoda iike" was a high ranking man in the hierarchy of the SS. Now that sounded interesting! After all "Toyoda" is a common Japanese family name, and I knew "miike" as a Japanese given name, so why not "iike" , too? Could he be some sort of exchange officer? But at this high rank? Did the German/Japanese military cooperation this far? Unbelievable! I googled the name, found some quite similar ones but no Toyoda iike. Only after looking up the higher functions in the SS for the approximate time it dawned on me. The Narrator just had no idea what the German pronunciation of a name was, so he simply invented it. The name in question was ultimately "Theodor Eicke". Yeah. Quite disappointing.
(for non-german speakers: the German pronunciation doesn't sound like "Toyoda iike" at all. Simply spelling "Theodore" the English way would really have been easier and more recognizable)
The funny part aside - the Narrator seems to try the best he can. But it's obvious he not only got zero supervision on the German pronunciation, also the French words and terms don't sound anything like French at all. And he really does the worst job on imitating German or French accents.
I was really interested in the plot of the book, so it was kind of nerve wrecking having to play back some German word a number of times simply because I can't understand it even though it's supposed to be in my native language. The same goes for the French names.

I'm sorry Mr. Narrator, I'm sure you meant well but please, please get help on the pronounciation for non-English terms and names.