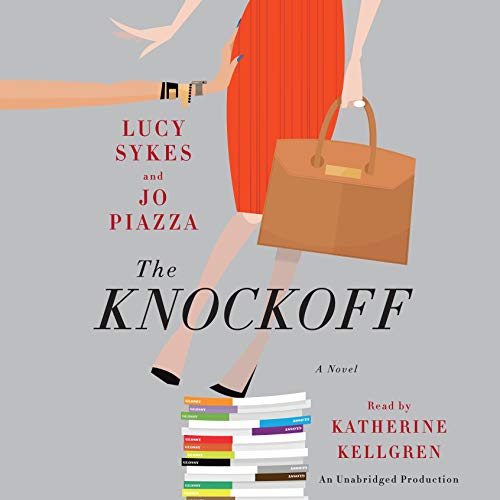 An outrageously stylish, wickedly funny novel of fashion in the digital age, The Knockoff is the story of Imogen Tate, editor in chief of Glossy magazine, who finds her 20-something former assistant Eve Morton plotting to knock Imogen off her pedestal, take over her job, and reduce the magazine, famous for its lavish 768-page September issue, into an app.

When Imogen returns to work at Glossy after six months away, she can barely recognize her own magazine. Eve, fresh out of Harvard Business School, has fired "the gray hairs", put the managing editor in a supply closet, stopped using the landlines, and hired a bevy of manicured and questionably attired underlings who text and tweet their way through meetings. Imogen, darling of the fashion world, may have Alexander Wang and Diane von Furstenberg on speed dial, but she can't tell Facebook from Foursquare and once got her iPhone stuck in Japanese for two days. Under Eve's reign, Glossy is rapidly becoming a digital sweatshop - hackathons rage all night, girls who sleep get fired, and "fun" means mandatory, company-wide coordinated dances to Beyoncé. Wildly out of her depth, Imogen faces a choice - pack up her Smythson notebooks and quit, or channel her inner geek and take on Eve to save both the magazine and her career. A glittering, uproarious, sharply drawn story filled with thinly veiled fashion personalities, The Knockoff is an insider's look at the ever-changing world of fashion and a fabulous romp for our internet-addicted age.

"Sykes and Piazza brilliantly satirize and skewer the freakiest aspects of today's changing fashion landscape with all its blogtastic insanity. Bravo girls!" (Simon Doonan, creative ambassador for Barneys New York and author of The Asylum: True Tales of Madness from a Life in Fashion)
"This is what it's really like working at a glossy, New York fashion magazine. Makes The Devil Wears Prada look like My Little Pony." (Toby Young, best-selling author of How to Lose Friends and Alienate People )
"In the interest of full disclosure I must reveal that Lucy is my MUCH older twin (by over half an hour). So I am biased. But even if Lucy weren't my sister, I would still say that The Knockoff is a bang-on, absolutely of-the-moment, super-trendy, amazingly witty take on the world of online and magazine fashion. " (Plum Sykes, best-selling author of Bergdorf Blondes)