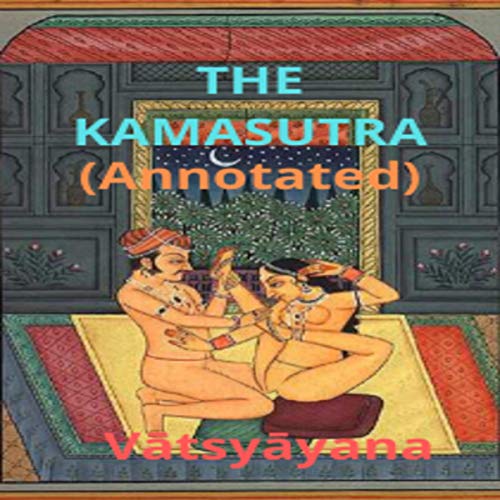 This is a great audioook. We have tried to annotate this book by writing a summary at the end of the book. We had added almost 480,00 words in our long summary.

Kamasutra is the oldest surviving Hindu text on erotic love. It is a sutra-genre text with terse aphoristic verses that have survived into the modern era with different bhasya (exposition and commentaries). The text is a mix of prose and anustubh-meter poetry verses. The text acknowledges the Hindu concept of Purusharthas, and lists desire, sexuality, and emotional fulfillment as one of the proper goals of life. Its chapters discuss methods for courtship, training in the arts to be socially engaging, finding a partner, flirting, maintaining power in a married life, when and how to commit adultery, sexual positions, and other topics.

The majority of the book is about the philosophy and theory of love, what triggers desire, what sustains it, and how and when it is good or bad. The text is one of many Indian texts on Kama Shastra. It is a much-translated work in Indian and non-Indian languages. The Kamasutra has influenced many secondary texts that followed after the 4th-century CE, as well as the Indian arts as exemplified by the pervasive presence Kama-related reliefs and sculpture in old Hindu temples. Of these, the Khajuraho in Madhya Pradesh is a UNESCO world heritage site. Among the surviving temples in north India, one in Rajasthan sculpts all the major chapters and sexual positions to illustrate the Kamasutra.

According to Wendy Doniger, the Kamasutra became "one of the most pirated books in English language" soon after it was published in 1883 by Richard Burton. Delight in the sexual act is greater than a man's.