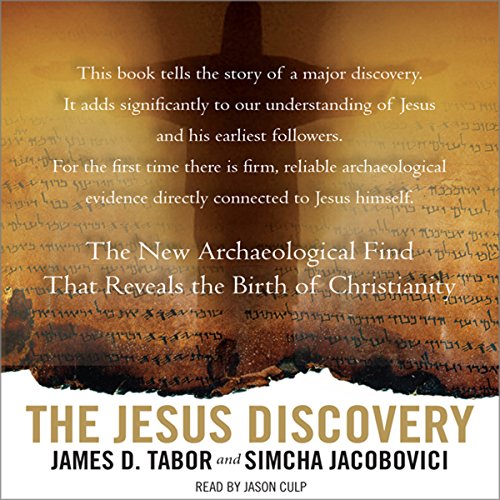 In 2010, using a specialized robotic camera, authors Tabor and Jacobovici, working with archaeologists, geologists, and forensic anthropologists, explored a previously unexcavated tomb in Jerusalem from around the time of Jesus. They made a remarkable discovery. The tomb contained several ossuaries, or bone boxes, two of which were carved with an iconic image and a Greek inscription. Taken together, the image and the inscription constitute the earliest archaeological evidence of faith in Jesus’ resurrection.

Since the newly discovered ossuaries can be reliably dated to before AD 70, when Jerusalem was destroyed by the Romans, they also provide the first evidence in Jerusalem of the people who would later be called "Christians". In fact, it is possible, maybe even likely, that whoever was buried in this tomb knew Jesus and heard him preach.

The newly examined tomb is only 200 feet away from the so-called Jesus Family Tomb. This controversial tomb, excavated in 1980 and recently brought to international attention, contained ossuaries inscribed with names associated with Jesus and his immediate family. Critics dismissed the synchronicity of names as mere coincidence. But the new discovery increases the likelihood that the "Jesus Family Tomb" is, indeed, the real tomb of Jesus of Nazareth. Tabor and Jacobovici discuss the evidence in support of this interpretation and describe how both tombs appear to have been part of the property of a wealthy individual, possibly Joseph of Arimathea, the man who, according to the gospels, buried Jesus.

The Jesus Discovery explains how the recent find is revolutionizing our understanding of the earliest years of Christianity. Tabor and Jacobovici discuss what the concept of resurrection meant to the first followers of Jesus, particularly how it differed from the common understanding of the term today. Because the new archaeological discovery predates all other Christian documents, including the gospels, it offers a dramatic witness to what the people who knew Jesus believed.

There is no doubt that this is one of the most important archaeological discoveries ever made. The Jesus Discovery is the firsthand account of how it happened and what it means.