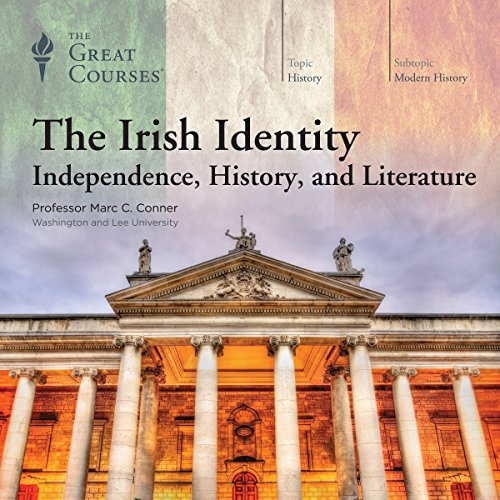 Many political and cultural events sent shock waves through the Irish world in the 19th and early 20th centuries as Ireland gradually shook off the shackles of British rule. Alongside a long and painful political process arose one of the greatest flourishings of literature in modern times - a spirited discourse among those who sought to shape their nation's future, finding the significance of their bloody present intimately entwined with their legendary past. As nationalists including Charles Stewart Parnell, Patrick Pearse, and Michael Collins studied their political situation and sought a road to independence, writers such as W. B. Yeats, James Joyce, J. M. Synge, Lady Gregory, and many others examined the emerging Irish identity and captured the spirit of the nation's ongoing history in their works.

Delve into this remarkable period with The Irish Identity: Independence, History, and Literature. After laying the groundwork of ancient Irish history and centuries of British rule - from the Norman invasion in the 12th century through the brutal Penal Laws and the Great Famine - Professor Conner brings you inside the Irish Renaissance, also called the Irish Revival. Around the turn of the 20th century, a group of writers began taking a keen interest in the uniquely Irish culture, from its language to its art to its mythology. This fascination fed into the growing demand for Irish nationhood, and the arts, culture, and politics of the time are inextricable.

The Irish Renaissance fused and elevated aesthetic and civic ambitions, fueling a cultural climate of masterful artistic creation and resolute political self-determination reminiscent of the Italian Renaissance. Over the course of 36 enthralling lectures, Professor Conner reveals the multifaceted story of the Irish Renaissance through an exploration of its complex history and remarkable literature.

Marc C. Conner is an extremely gifted and knowledgeable lecturer, who‘s pathos for his Irish history captures his listeners. This is indeed a masterpiece.