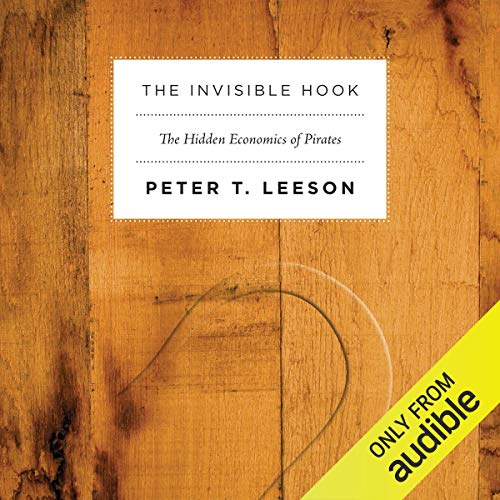 Why did pirates fly flags of Skull & Bones? Why did they create a "pirate code"? Were pirates really ferocious madmen? And what made them so successful? The Invisible Hook uses economics to examine these and other infamous aspects of piracy. Leeson argues that the pirate customs we know and love resulted from pirates responding rationally to prevailing economic conditions in the pursuit of profits.

The Invisible Hook looks at legendary pirate captains like Blackbeard, Black Bart Roberts, and Calico Jack Rackam, and shows how pirates' search for plunder led them to pioneer remarkable and forward-thinking practices. Pirates understood the advantages of constitutional democracy - a model they adopted more than 50 years before the United States did so. Pirates also initiated an early system of workers' compensation, regulated drinking and smoking, and in some cases practiced racial tolerance and equality. Leeson contends that pirates exemplified the virtues of vice - their self-seeking interests generated socially desirable effects and their greedy criminality secured social order. Pirates proved that anarchy could be organized.

"Leeson hangs the meat of his pirate tale on a sturdy skeleton of economics.... The Invisible Hook is a delightful read, thanks to Leeson's engaging writing. He reduces a veritable mountain of facts and history into an entertainingly educational experience." (Barron's)

Often interesting but repetitive on some ideas and navals Aspects were Not considered, even if they seem quite important.

Best insight on pirates to get.

Very interesting to see how early democracy & and insurance actually was introduced. And how falt the pirate structure was.