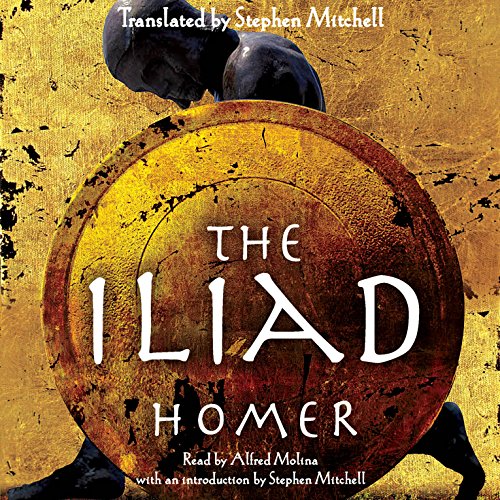 The power and the beauty of The Iliad resound again across 2,700 years in Stephen Mitchell's exciting new translation, as if the lifeblood of its heroes Achilles and Patroclus, Hector and Priam flowed in every word. And we are there with them amid the horror and ecstasy of war, carried along by a poetry that lifts even the most devastating human events into the realm of the beautiful.

Based on the recent, superb M.L. West edition of the Greek, this Iliad is more accessible and moving than any previous version. Whether it is his exciting recent version of Gilgamesh, with more than 150,000 copies sold, or his unmatched translation of the poet Rilke, still the standard after 29 years, or his Tao Te Ching, which has sold more than 900,000 copies and has itself been translated into six languages, Stephen Mitchell's books are international sensations. Now, thanks to his scholarship and poetic power, which re-creates the energy and simplicity, the speed, grace, and continual thrust and pull of the original, The Iliad's ancient story bursts vividly into new life and will reach an even larger audience of listeners.

Please note: Book 10, recognized since ancient times as a later addition to the Iliad, has been omitted in this translation.

“Stephen Mitchell’s magnificent new translation of the Iliad reminds us that there is always a new and different way to read and interpret the great classics, and that they need to be reinvigorated from generation to generation, just as we need to be reminded that they are, however venerated, above all stories: exciting, full of life and great characters, in short great entertainment, not just great monuments of culture or the Western canon. Mr. Mitchell has accomplished this difficult feat wonderfully well, and produced a book which is a joy to read and an Iliad for this generation.” (Michael Korda, D. Litt., author of Hero, Ike, and Ulysses S. Grant)
"Stephen Mitchell has done a marvelous thing here: he has given fresh energy and poetic force to a work that perennially repays our attention. Without the Iliad the West would be a vastly poorer place; Homer’s achievement speaks to every successive generation with its unflinching understanding of the essential tragic nature of life. Mitchell’s translation is a grand accomplishment.” (Jon Meacham, author of American Lion)
"Mitchell’s wonderful new version of the Iliad is a worthy addition to his list of distinguished renditions of the classics.” (Peter Matthiessen)