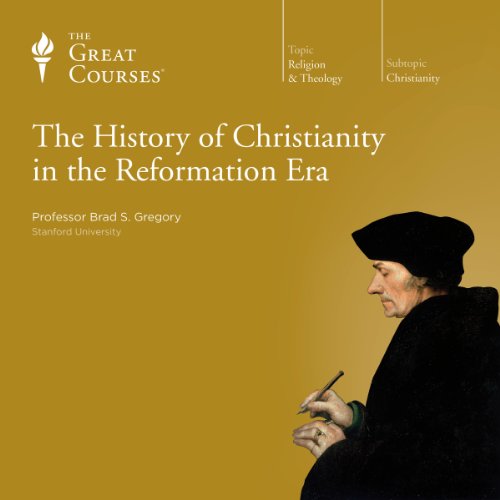 The History of Christianity in the Reformation Era

The History of Christianity in the Reformation Era

It still takes a major effort of historical imagination to enter the minds of those who lived during the Reformation Era, who were willing to suffer martyrdom or martyr others for what we would regard as minor doctrinal differences. These 36 lectures are designed to take you inside the minds of those who supported the Reformation and those who resisted it. They cover the three broad religious traditions that endured or arose during these years: Roman Catholicism, both as it existed on the cusp of the Reformation and as it changed to meet the Protestant challenge; Protestantism, meaning the forms approved by political authorities, such as Lutheranism, Calvinism, and Anglicanism; and "radical" Protestantism, meaning the forms often at odds with political authorities, such as Anabaptism. The goal: to understand historically the theological and devotional aspects of each of these three broad traditions on its own terms and to grasp the overall ramifications of religious conflict for the subsequent course of modern Western history.

Along the way you'll encounter the era's many influential figures, including: Erasmus, Martin Luther, Charles V, Henry VIII, Ignatius Loyola, John Calvin, and Menno Simons. Professor Gregory also raises questions that any student of the period must ponder. Was the late medieval Church vigorous or, as Martin Luther and others came to insist, horribly corrupt? How do the events of the Reformation reveal the shifting balance between religious and secular authorities? Did the Reformation succeed or fail? Ultimately, the long-term payoff of these lecture series is a better understanding of the relationship between the world of early modern Europe - and the modern world to which it gave rise.