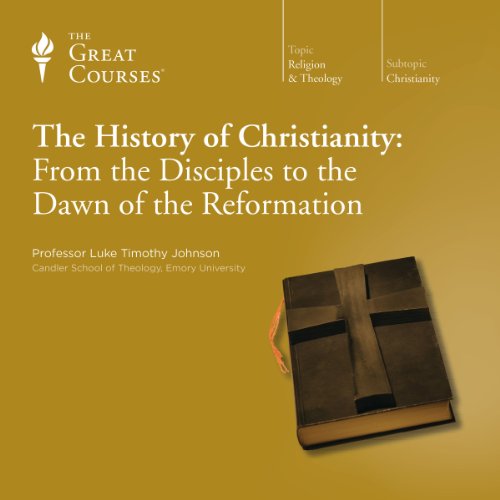 The History of Christianity: From the Disciples to the Dawn of the Reformation

How did a persecuted sect in 1st-century Palestine rise to command such a massive influence on human culture, imagination, and spirit? How did Christianity weather the first critical stages of its historical development and attain its fundamental and enduring cultural role?

Speaking incisively to all of this and more, these 36 enthralling lectures tell the phenomenal story of Christianity's first 1,500 years, in all its remarkable diversity and complex dimension. In the company of Professor Johnson of Emory University, you'll follow the dramatic trajectory of Christianity from its beginnings as a "cult of Jesus" to its rise as a fervent religious movement; from its emergence as an unstoppable force within the Roman Empire to its critical role as an imperial religion; from its remarkable growth, amid divisive disputes and rivalries, to the ultimate schism between Eastern Orthodoxy and Western Catholicism; and from its spread throughout the Western world to its flowering as a culture that shaped Europe for 800 years.

Throughout this series, you'll look deeply into the nature and role of faith, the ethos of our civilization, and the core conceptions of identity and ethics that underlie the Western worldview. This is history in the most vivid and meaningful sense of the word: an inquiry into the past that opens a compelling awareness of our present-of our living origins, our ultimate horizons, our deeper selves.

Das sagen andere Hörer zu The History of Christianity: From the Disciples to the Dawn of the Reformation

I admit to have a perverse interest in religion. Perverse because I´am a staunt atheist. And again professor Johnson was just a disapointment for me. Why should anybody believe such nonsense? After 5 lectures I decided to cancel the the order.