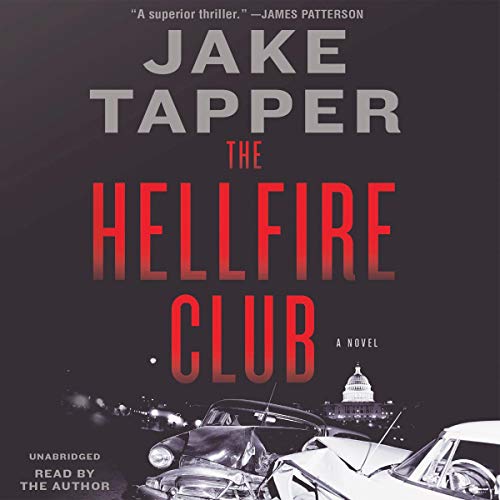 The debut political thriller from Jake Tapper, CNN's chief Washington correspondent and the New York Times best-selling author of The Outpost - 1950s DC intrigue about a secret society and a young congressman in its grip.

Charlie Marder is an unlikely congressman. Thrust into office by his family ties after his predecessor died mysteriously, Charlie is struggling to navigate the dangerous waters of 1950s Washington, DC, alongside his young wife, Margaret, a zoologist with ambitions of her own. Amid the swirl of glamorous and powerful political leaders and deal makers, a mysterious fatal car accident thrusts Charlie and Margaret into an underworld of backroom deals, secret societies, and a plot that could change the course of history. When Charlie discovers a conspiracy that reaches the highest levels of governance, he has to fight not only for his principles and his newfound political career...but for his life.

"Tapper uses his storytelling chops to deftly put you in the moment when Joe McCarthy was waving his infamous paper and the Congress was at peak skullduggery. Hellfire is a potent thriller, replete with well-developed characters that made me think that history does indeed repeat itself." (David Baldacci, number one New York Times best-selling author of End Game)

"The Hellfire Club's first, thrilling scene pulled me into 1950s Washington, D.C., and didn't let go until the last, satisfying page. Tapper's passions for history and politics shine through in this remarkably timely, page-turning debut." (Alafair Burke, author of the New York Times best-selling The Wife)

"Here's your chance to get up close and personal with John and Bobby Kennedy, Nixon, Eisenhower, Kefauver, LBJ and Joe McCarthy. Jake Tapper puts you right back in the 50's. At the same time, Tapper has written a superior thriller that I couldn't stop reading. To be completely honest though, Tapper is an irritating bastard. Journalists like him are supposed to be writing dusty non-fiction tomes that help us get to sleep, not thrillers that keep us up half the night. The Hellfire Club is a helluva good read. Now Tapper should return to writing non-fiction." (James Patterson, number one New York Times best-selling author)