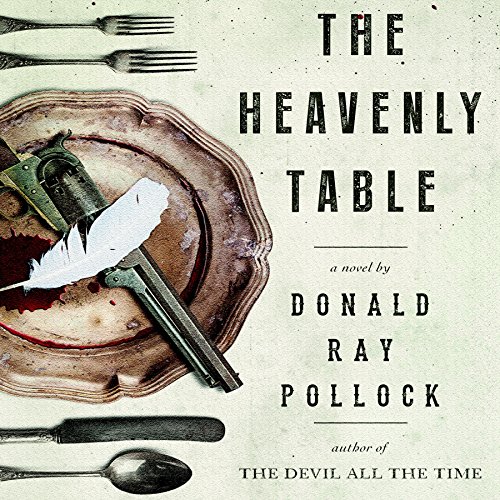 From Donald Ray Pollock, author of the highly acclaimed The Devil All the Time and Knockemstiff, comes a dark, gritty, electrifying (and, disturbingly, weirdly funny) new novel that will solidify his place among the best contemporary American authors.

It is 1917, in that sliver of borderland that divides Georgia from Alabama. Dispossessed farmer Pearl Jewett ekes out a hardscrabble existence with his three young sons: Cane (the eldest, handsome, intelligent); Cob (short, heavyset, a bit slow); and Chimney (the youngest, thin, ill-tempered). Several hundred miles away in Southern Ohio, a farmer by the name of Ellsworth Fiddler lives with his son, Eddie, and his wife, Eula. After Ellsworth is swindled out of his family's entire fortune, his life is put on a surprising, unforgettable, and violent trajectory that will directly lead him to cross paths with the Jewetts. No good can come of it. Or can it?

In the Gothic tradition of Flannery O'Connor and Cormac McCarthy, with a healthy dose of cinematic violence reminiscent of Sam Peckinpah, Quentin Tarantino, and the Coen Brothers, the Jewetts and the Fiddlers will find their lives colliding in increasingly dark and horrific ways, placing Donald Ray Pollock firmly in the company of the genre's literary masters.

"In a crowded room full of voices, Don Pollock's voice is so distinct you'll hear first and won't ever, ever forget it. Nor will you want to. And the kicker is this: He somehow keeps getting better." (Tom Franklin, author of Poachers and Crooked Letter, Crooked Letter)
" The Heavenly Table is the latest and strongest evidence that Donald Ray Pollock is one of the most talented and original writers at work today. With uniquely vivid and graceful prose he renders a tale destined to linger in the reader's mind, a story by turns violent and darkly amusing, and always powerful. The novel is sure to be ranked among the year's best." (Michael Koryta, New York Times best-selling author of Those Who Wish Me Dead)
" The Heavenly Table is a ferociously gothic ballad about desperate folks with improbable dreams and scant means. It is potent and chimeric, dank, violent, swamped in tragedy - and funny as hell." (Daniel Woodrell, author of The Maid's Version and Winter's Bone)

A wonderful book! The story plays in the time of WW I. Great speaker. Highly recommendable.