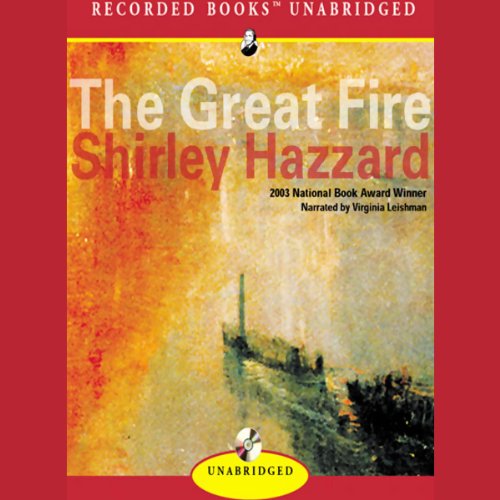 This mesmerizing, poetic novel won the 2003 National Book Award for fiction and has earned universal acclaim. Set against the beautiful but tragic landscape of post-World War II Asia, The Great Fire tells a sweeping tale of the search for new beginnings in a world ravaged by tragedy.

Thirty-two-year-old war hero Aldred Leith is in Japan to survey the Hiroshima devastation. His close friend and fellow veteran Peter Exley prosecutes Japanese war criminals in Hong Kong. Striving to rebuild lives shattered by war, both men reach critical turning points. Leith falls in love with a precocious and charming 17-year-old girl, while Exley faces a decision that will forever alter his path.

Author Shirley Hazzard's first novel in more than 20 years, The Great Fire is an elegant and beautifully crafted story that resonates long past the final word.

"What blows away all cobwebs is the extraordinary quality of the writing, gravely beautiful and utterly attentive...[a] marvelous book." ( The Observer)
"Hazzard combines emotion on a scale we associate with 19th century novels with language that has the freedom and lucid precision of early 20th century modernism." ( Salon.com)
"The purity of her sentences, each one resonant with implication, create an effortless flow. This is a quiet book, but one that carries portents well beyond its time and place, suggesting the disquieting state of our current world." ( Publishers Weekly)