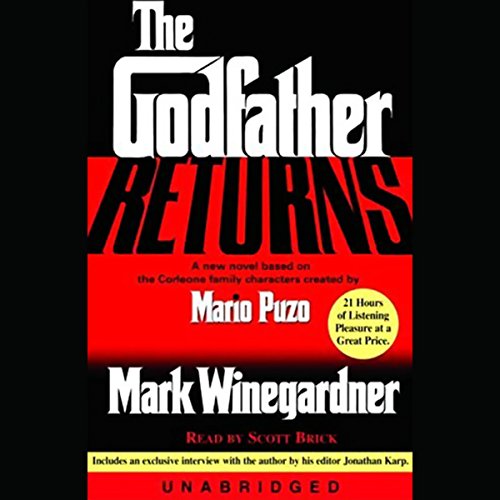 It is 1955. Michael Corleone has won a bloody victory in the war among New York's crime families. Now he wants to consolidate his power, save his marriage, and take his family into legitimate businesses. To do so, he must confront his most dangerous adversary yet, Nick Geraci, a former boxer who worked his way through law school as a Corleone street enforcer, and who is every bit as deadly and cunning as Michael. Their personal cold war will run from 1955 to 1962, exerting immense influence on the lives of America's most powerful criminals and their loved ones.

Sweeping from New York and Washington to Las Vegas and Cuba, The Godfather Returns is the spellbinding story of America's criminal underworld at mid-century and its intersection with the political, legal, and entertainment empires. Mark Winegardner brings an original voice and vision to Mario Puzo's mythic characters while creating several equally unforgettable characters of his own. The Godfather Returns stands on its own as a triumph in a tale about what we love, yearn for, and sometimes have reason to fear...family.

" The Godfather Returns is not only a real book by a real writer. It's also a real pleasure, a fine swirling epic: bitter, touching, funny, and true." ( The New York Times Book Review)
"A phenomenally entertaining, psychologically rich saga that spans the entire Godfather years imagined in novel and film by Mario Puzo....A wholly absorbing novel that's written beautifully, with great skill and passion. Godfather fans will love this tale." ( Publishers Weeekly)

... is an interesting sequel to the Puzzo edition...the plot and story-line confirms the work of a brillant writer.
... keep you curious to the last page...