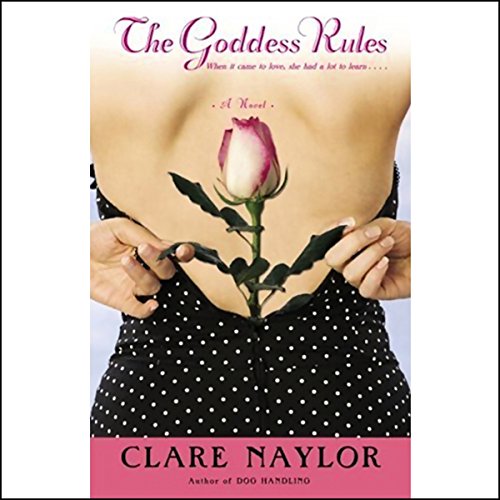 Here's the delightful new novel from Clare Naylor, whose sleeper hit Dog Handling was one of Cosmopolitan's Best Beach Reads for 2002. Fresh and fun, The Goddess Rules is an outrageous, wry, and razor-sharp portrait of a girl who thinks her life is just fine, until she meets a woman who swears by the belief that life is meant to be fabulous.

When obsessed pet owners have pooches or kitties they want immortalized on canvas, Kate Disney is the artist of choice. From her shed (which doubles as a studio and apartment) in London's Primrose Hill, Kate caters to the whims of the rich and famous while herself living a decidedly bohemian existence. The problem is, she has a tendency to cater to her on-again, way-off-again boyfriend as well. Jake is so erratic, that most of her friends don't understand why she even bothers. But it's hard to fall out of love with a man who writes her songs and calls her "Angel", even if he disappears for weeks at a time.

Luckily for Kate, Mirabelle Moncur isn't buying any of that claptrap. Mirri was an actress, a legend in her time. Now, at age 60, she's given up on fame and men and lives in Africa, where she raises lion cubs. But her reclusive nature has done nothing to dull her beauty, mar her incredible figure, or dampen her outrageous joie de vivre.

After sweeping into London to have Kate paint a portrait of her favorite cub, Mirri seizes hold of Kate's life, from the baggy wardrobe to the hopeless taste in men. Under Mirri's tutelage, Kate learns to dance on tables with abandon, drink like a dockworker, and flirt like a goddess. And when her old friend Louis reenters the picture, she begins to see things in a whole new light. But Mirri has secrets that hint at a less than divine future. Now it's Kate's turn to teach Mirri a thing or two about life, love, and being fabulous.