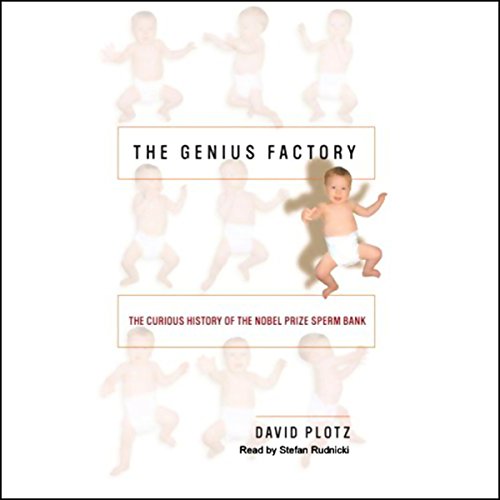 It was the most radical human-breeding experiment in American history, and no one knew how it turned out. The Repository for Germinal Choice, nicknamed the Nobel Prize sperm bank, opened to notorious fanfare in 1980, and for two decades, women flocked to it from all over the country to choose a sperm donor from its roster of Nobel-laureate scientists, mathematical prodigies, successful businessmen, and star athletes. But the bank quietly closed its doors in 1999; its founder dead, its confidential records sealed, and the fate of its children and donors unknown. In early 2001, award-winning columnist David Plotz set out to solve the mystery of the Nobel Prize sperm bank.

Crisscrossing the country and logging countless hours online, Plotz succeeded in tracking down previously unknown family members: teenage half-brothers who ended up following vastly different paths, mothers who had wondered for years about the identities of the donors they had selected on the basis of code names and brief character profiles, fathers who were proud or ashamed or simply curious about the children who had been created from their sperm samples.

The children of the "genius factory" are messengers from the future, a future that is bearing down on us fast. What will families be like when parents routinely "shop" for their kids' genes? What will children be like when they're programmed for greatness? In this stunning, eye-opening book, one of our finest young journalists previews America's coming age of genetic expectations.

"Plotz has fun poking holes in the eugenic vision of the repository's founder....More captivating, however, is Plotz's recounting of the efforts of the women who visited the repository to discover the identities of their donors. As he gets to know a cluster of families and donors, Plotz reaches insightful conclusions about the unforeseen emotional consequences of artificial insemination....The attempt to breed genius babies may have an aura of surreal humor, but the sensitive narration always reminds us of the real lives affected, and created, through this oddball utopian scheme." (Publishers Weekly)

I am amazed about the content of this book. I became so fascinated that I was busy googling the names just to have a glimpse at the "real" faces of the names mentioned in the book. Thumbs up