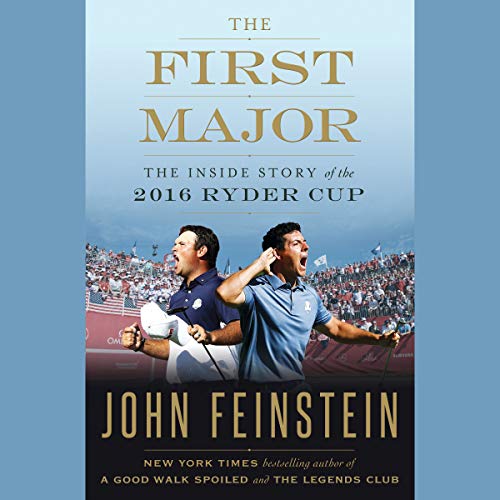 From the number one New York Times best-selling author of A Good Walk Spoiled, a dramatic chronicle of the bitterly fought 2016 Ryder Cup pitting a US team out for revenge against the Europeans determined to keep the cup out of American hands.

Coming into 2016, the Americans had lost an astounding six out of the last seven Ryder Cup matches, and tensions were running high for the showdown that took place in October 2016 in Hazeltine, Minnesota, just days after American legend Arnold Palmer had died. What resulted was one of the most raucous and heated three days in the cup's long history. Award-winning author John Feinstein takes listeners behind the scenes, providing an inside view of the dramatic stories as they unfolded: veteran Phil Mickelson's two-year roller coaster as he upended the American preparation process and helped assemble a superb team; superstar Rory McIlroy becoming the clear-cut emotional leader of the European team and his reasons for wanting to beat the US team so badly this time around; the raucous matches between McIlroy and American Patrick Reed - resulting in both incredible golf and several moments that threatened to come to blows; the return of Tiger Woods not as a player but an assistant captain and his obsession with helping the US win - which was never the case when he was playing.

"Feinstein compellingly re-creates the excitement, sometimes shot by shot, especially in the classic McIlroy-Reed singles match, which has come to be a symbol of golf at its best, both for shotmaking and sportsmanship. A great moment in golf history, vividly captured." ( Booklist)
"Golf fans love Feinstein's books because he's trusted by the pros and thus can give inside information no other journalist can capture, plus he has a flair for telling a great story.... His journalistic style of short, pithy paragraphs drives the narrative along at breakneck speed. Recommended for any sports enthusiast and a must for golfers of all handicaps." ( Kirkus Reviews)

Entertaining and much more than just the story of the 2016 Ryder Cup. The quality of the story can't always compensate for the poor and in parts sloppy recording (it's ANDY Sullivan not Andrew). Sounds as if Feinstein recorded at home.