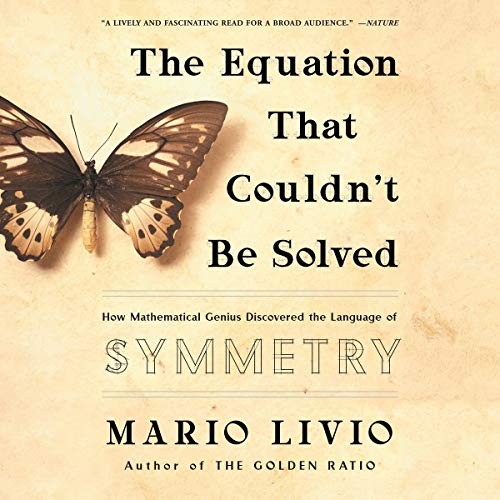 The Equation That Couldn't Be Solved

What do Bach's compositions, Rubik's Cube, the way we choose our mates, and the physics of subatomic particles have in common? All are governed by the laws of symmetry, which elegantly unify scientific and artistic principles. Yet the mathematical language of symmetry - known as group theory - did not emerge from the study of symmetry at all, but from an equation that couldn't be solved.

For thousands of years mathematicians solved progressively more difficult algebraic equations, until they encountered the quintic equation, which resisted solution for three centuries. Working independently, two great prodigies ultimately proved that the quintic cannot be solved by a simple formula. These geniuses, a Norwegian named Niels Henrik Abel and a romantic Frenchman named Évariste Galois, both died tragically young. Their incredible labor, however, produced the origins of group theory.

The first extensive, popular account of the mathematics of symmetry and order, The Equation That Couldn't Be Solved is told not through abstract formulas but in a beautifully written and dramatic account of the lives and work of some of the greatest and most intriguing mathematicians in history.

History and basics of Group Theory

Unfortunately, there are very few audiobooks about Group Theory, but this one definitely is a good one worth listening to. The author tells an enjoyable story with lots of real life stories about key protagonists - but putting a clear focus to E. Galois who seemed to have inspired the author’s passion. Nevertheless, the book also presents a concise, but very basic introduction to Group Theory, unfortunately not going deeper into certain Groups which are key to today’s science - Lie groups and finite groups. However, there is a chapter linking Group Theory to the Standard Model and String Theory, but it only scratches the surface. Obviously, the intention was rather on the historical part.
The speaker has a comforting voice and an optimal speed. Only point is that names and sentences in foreign languages (esp French) are pronounced in a rather American way which might be a bit disturbing for European ears.