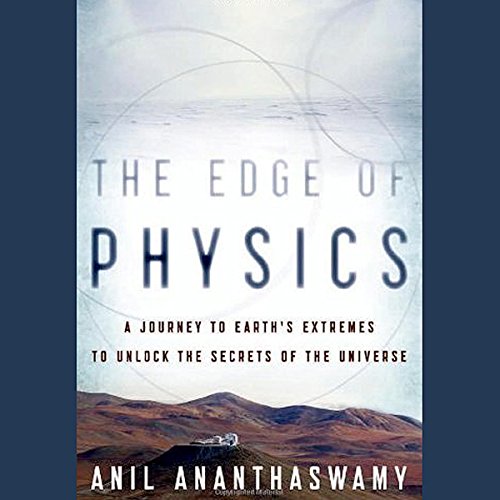 The Edge of Physics

In this deeply original book, science writer Anil Ananthaswamy sets out in search of the telescopes and detectors that promise to answer the biggest questions in modern cosmology. Why is the universe expanding at an ever faster rate? What is the nature of the "dark matter" that makes up almost a quarter of the universe? Why does the universe appear fine-tuned for life? Are there others besides our own?

Ananthaswamy soon finds himself at the ends of the earth in remote and sometimes dangerous places. Take the Atacama Desert in the Chilean Andes, one of the coldest, driest places on the planet, where not even a blade of grass can survive. Its spectacularly clear skies and dry atmosphere allow astronomers to gather brilliant images of galaxies billions of light-years away. Ananthaswamy takes us inside the European Southern Observatory's Very Large Telescope on Mount Paranal, where four massive domes open to the sky each night "like dragons waking up." He also takes us deep inside an abandoned iron mine in Minnesota, where half-mile-thick rock shields physicists as they hunt for elusive dark matter particles. And to the East Antarctic Ice Sheet, where engineers are drilling 1.5 miles into the clearest ice on the planet. They're building the world's largest neutrino detector, which could finally help reconcile quantum physics with Einstein's theory of general relativity.The stories of the people who work at these and other dramatic research sites, from Lake Baikal in Siberia to the Indian Astronomical Observatory in the Himalayas to the subterranean lair of the Large Hadron Collider make for a compelling new portrait of the universe and our quest to understand it.

An atmospheric, engaging, and illuminating read, The Edge of Physics depicts science as a human process, bringing cosmology back down to earth in the most vivid terms.

"A meticulous, accessible update of the latest ideas and instruments that contribute to the clarification of an increasingly puzzling universe." (Kirkus Reviews)