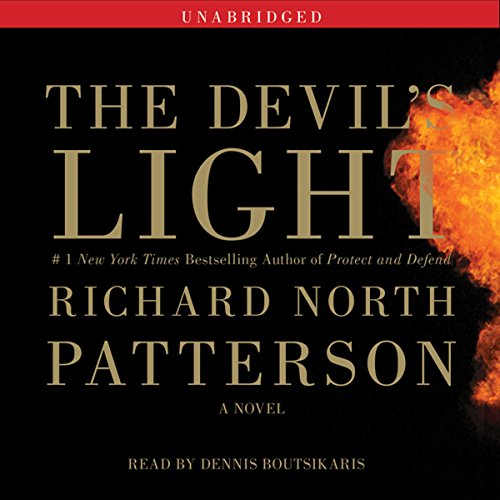 The Devil's Light tells the story of an al-Qaida operative named Amer al-Zaroor, who, on orders from Osama bin Laden, directs the theft of a nuclear weapon from the Pakistani military, and then transports it toward its intended target, Israel. Meanwhile, bin Laden announces to the world that he will make a major terrorist strike on the tenth anniversary of 9/11.

Deep inside Washington, Brooke Chandler, a CIA operative whose cover was blown by an incompetent colleague in Lebanon, thinks he knows how the bomb is being moved toward its target and how to find it. First he must overcome the skepticism of the CIA and the White House, and then he must find the bomb and disable or detonate it before it causes the Middle East to go up in flames.

“A nuclear bomb is about to explode in a major city whose streets will turn bright with the light of a thousand suns. In this brilliant novel, Richard North Patterson slips into the minds of the mad and messianic and explores what it will mean for all of us if we allow an apocalyptic nightmare to become tomorrow’s history-bending reality. The Devil's Light is more than the provocative ruminations of a master storyteller. It is a powerful call to action - lest we find ourselves sifting through the radiated wreckage of a truth told too late. Masterful and illuminating, The Devil's Light is Richard North Patterson at his best. You will not want, or be able to, put this story down. It is tomorrow’s catastrophe riding on the ‘gleaming wings of science.’” (William S. Cohen, former Secretary of Defense)
“Impossible to dismiss as mere fiction, The Devil's Light is a terrifying vision of what very well could bring down our world as we know it. With its real-life spies locked in a deathly struggle, this thrillingly told novel is all too real.” (Robert Baer, former CIA field officer and New York Times best-selling author)