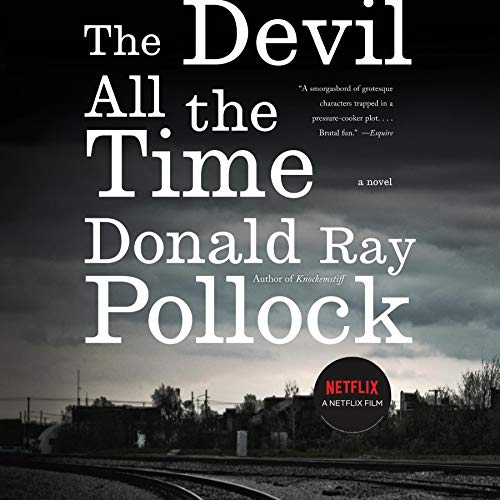 The Devil All the Time

From the acclaimed author of Knockemstiff—called “powerful, remarkable, exceptional” by the Los Angeles Times—comes a dark and riveting vision of America that delivers literary excitement in the highest degree.

In The Devil All the Time, Donald Ray Pollock has written a novel that marries the twisted intensity of Oliver Stone’s Natural Born Killers with the religious and Gothic over­tones of Flannery O’Connor at her most haunting.

Set in rural southern Ohio and West Virginia, The Devil All the Time follows a cast of compelling and bizarre characters from the end of World War II to the 1960s. There’s Willard Russell, tormented veteran of the carnage in the South Pacific, who can’t save his beautiful wife, Charlotte, from an agonizing death by cancer no matter how much sacrifi­cial blood he pours on his “prayer log.” There’s Carl and Sandy Henderson, a husband-and-wife team of serial kill­ers, who troll America’s highways searching for suitable models to photograph and exterminate. There’s the spider-handling preacher Roy and his crippled virtuoso-guitar-playing sidekick, Theodore, running from the law. And caught in the middle of all this is Arvin Eugene Russell, Willard and Charlotte’s orphaned son, who grows up to be a good but also violent man in his own right.

Donald Ray Pollock braids his plotlines into a taut narrative that will leave readers astonished and deeply moved. With his first novel, he proves himself a master storyteller in the grittiest and most uncompromising American grain.

"If Pollock’s powerful collection Knockemstiff was a punch to the jaw, his follow-up, a novel set in the violent soul-numbing towns of southern Ohio and West Virginia, feels closer to a mule’s kick, and how he draws these folks and their inevitably hopeless lives without pity is what the kick’s all about." ( Publishers Weekly)
"The God-fearing hard-luck characters who populate Donald Ray Pollock’s debut novel, The Devil All the Time, move through the southern outlands of Ohio and the isolated hollows of West Virginia like figures in a collective nightmare of poverty, addiction, superstition, and crime" (Lisa Shea, ELLE magazine)
“This novel fulfills the promise made by Pollock’s debut collection, Knockemstiff. He is a real writer, and The Devil All The Time hits you like a telegram from Hell slid under your door at three o’clock in the morning.” (William Gay, author of Provinces of Night and The Long Home)

Das sagen andere Hörer zu The Devil All the Time