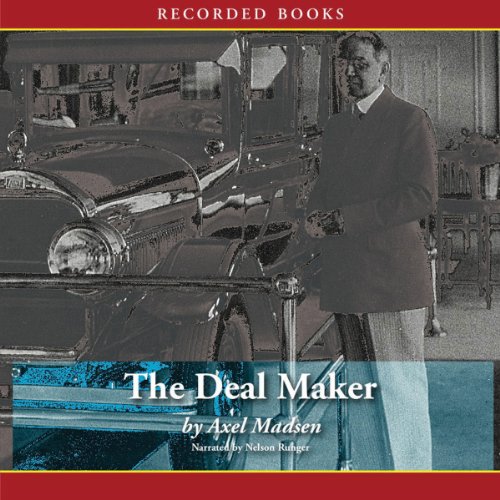 Author of 14 biographies, Axel Madsen chronicles the people who shaped the 20th century. In The Deal Maker, he sheds light on a man whose tireless optimism led to the formation of the first super-corporation.

A charismatic salesman in the late 19th century, William Durant started a cart-building business after accepting an especially comfortable ride one day. By the time he turned 40, he was a millionaire wondering what to do with the rest of his life. When he was approached by retired plumber David Buick and a group of friends from his hometown of Flint, Michigan, Durant had only ridden in an automobile twice. His ensuing creation of General Motors essentially invented modern-day corporate America, gaining and losing him three fortunes in the process.

Durant's story highlights the uneasy relationship between inventors and those who control the capital to exploit those inventions. Nelson Runger's narration takes listeners to a time when men like Durant, Henry Ford, J. P. Morgan, and Pierre du Pont were making decisions that would shape America's future.