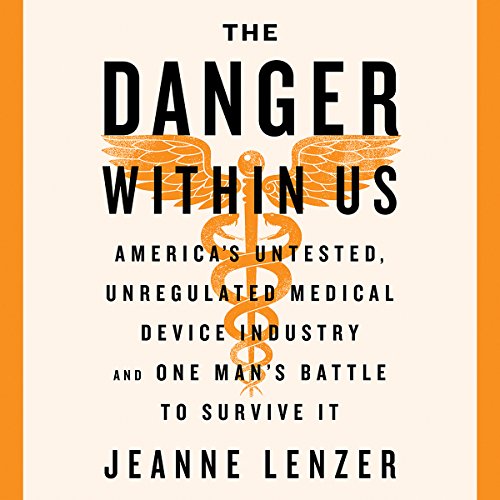 The Danger Within Us

In The Danger Within Us, award-winning journalist Jeanne Lenzer brings these horrifying statistics to life through the story of one working-class man who, after his "cure" nearly kills him, ends up in a battle for justice against the medical establishment.

His crusade leads Lenzer on a journey through the dark underbelly of the medical device industry, a fascinating and disturbing world that hasn't been written about before. What Lenzer exposes will shock listeners: rampant corruption, elaborate cover-ups, shameless profiteering, and astonishing lack of oversight, all of which leads to dangerous devices (from artificial hips to pacemakers) going to market and into our bodies.

In the vein of America's Bitter Pill and A Civil Action, The Danger Within Us is a meticulously researched and propulsive listen that will fill you with anger and indignation, a stirring call for reform, and a must-listen for anyone who cares about the future of American health care.

"One of the best books in medicine I have read. A splendid, savage story about the failings of modern device regulation that reads like a mystery, not a work of medical non-fiction: It turns out to be both." (Vinay Prasad, assistant professor of medicine, Oregon Health and Science University, and author of Ending Medical Reversal)
"In this disturbing and riveting book, the indefatigable investigative reporter Jeanne Lenzer tells the story of how millions of Americans are implanted with medical devices with almost no proof that they are safe. Lenzer exposes the web of commercial incentives governing their use, and the refusal of the manufacturers and the FDA to take responsibility when things go wrong." (Marcia Angell, former editor in chief, the New England Journal of Medicine, and author of The Truth About the Drug Companies)

"More than a decade ago, longtime BMJ contributor Lenzer abandoned her career as an emergency room physician associate to become an investigative medical journalist. Her debut book, an inspired inquiry into the politics of the industry, is startling and provocative.... Reading like a cross between a riveting medical thriller and 'a Kafka novel', the book is a powerful cautionary tale.... An impassioned exposé that uncovers a significant danger within the contemporary health care industry." (Kirkus)

"Lenzer reads her investigation with passion.... Lenzer's compassion for Fagan and others affected is clear in her voice." (AudioFile)

Das sagen andere Hörer zu The Danger Within Us