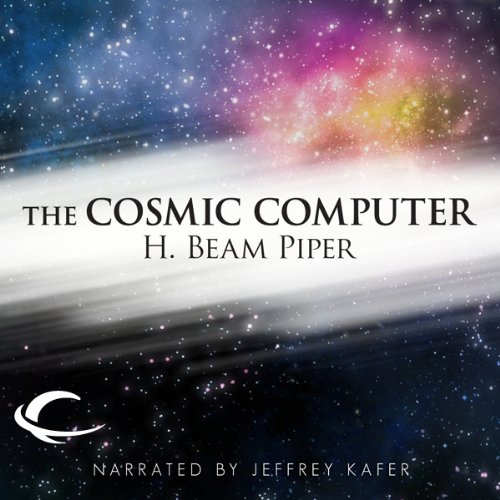 The Cosmic Computer, originally titled The Junkyard Planet, is one of Henry Beam Piper’s stories set in the alternate "Future History" of the 6,000 years following the year of the first nuclear chain reaction, 1942. This entry takes place in a distant, chaotic era of Piper’s detailed universe where many planets and human institutions have fallen apart. The audiobook’s protagonist, Conn Maxwell, returns to his particularly hard-hit home planet, what Maxwell refers to as a "junkyard of empire", aiming to raise hopes and funds with the promise of a legendary lost supercomputer hidden on a literal junkyard planet. Jeffrey Kaffer’s hard and tough performance enhances the sense of Maxwell as an assertive leader navigating a harsh but strikingly and exhaustingly described future.

Conn Maxwell returns from Terra to his poverty-stricken home planet of Poictesme, “The Junkyard Planet”, with news of the possible location of Merlin, a military super-computer rumored to have been abandoned there after the last war. The inhabitants hope to find Merlin, which they think will be their ticket to wealth and prosperity. But is Merlin real or just an old rumor? And if they find it, will it save them - or tear them apart?