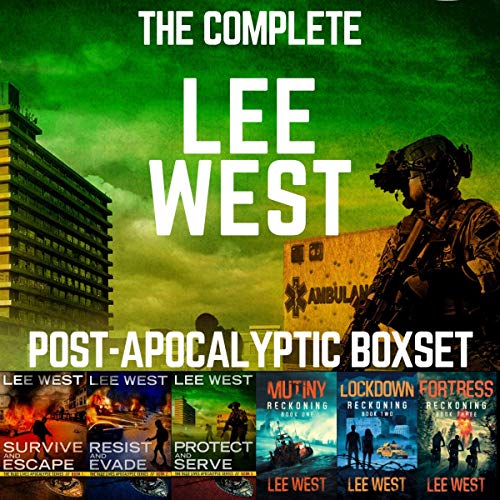 "A refreshing take on the genre! Lee West takes your worst fears and multiplies them by 10...."

Sam and Jane Archer walk out of a back-country hiking trip into a living nightmare. Their car is vandalized and dead, along with every other vehicle in the trailhead parking lot. Unable to get a cell phone signal, and spooked by a threatening encounter, they resign themselves to a long hike home, suspecting a possible EMP attack against the United States.

What they discover along the way shakes them to the core!

The electrical grid has been down for two weeks, plunging the world as they once knew it into complete chaos. Citizens live in helpless terror of violent gangs - the police hunted down and killed on sight. Food and essential resources have dwindled to nothing, taken by the wild bands of marauders that have risen from the collapse to murder and plunder at will.

Little hope remain, as Jane, a local police officer, and her husband Sam, a military veteran, start the harrowing journey home to save their only daughter Lea - before she is consumed by the madness.

Joe and Meg Birch have saved for years to take the trip of a lifetime. On the last night of their cruise, while most of the passengers are sleep - the unthinkable occurs. A suspected electromagnetic pulse (EMP) damages most of the cruise ship's critical systems, forcing the crew to divert the remaining power to essential systems.

While the massive ship struggles in rough seas, the seasick passengers grow increasingly uneasy about their situation. The flow of food and drinks has been significantly reduced, air-conditioning is non-existent and the ship's security team is visibly armed. What they don't know is that the ship has lost contact with the mainland, and their captain is on the verge of making life-altering decision for all of them.

Skeptical of the conditions onshore and unwilling to pull into the ship's homeport without the assistance of local pilot craft, the captain elects to leave the area and seek safe harbor to the south. There's just one catch. The ship only carries enough food and fuel to last a few more days - and their destination remains uncertain. The geographical scope and magnitude of the damage caused by the mysterious event remains unknown to the crew.

With Joe and Meg's prospect of returning home about to slip away, the Birch's face an agonizing choice. Stay with the ship and take a chance on the captain - or steal a lifeboat and try to return home. Joined by like-minded passengers and a few salty crew members, they decide to make their own destiny - despite the unknown dangers.

The Mutiny chronicles this impossible, gut-wrenching journey to get home, where it quickly becomes obvious that their story is far from over!