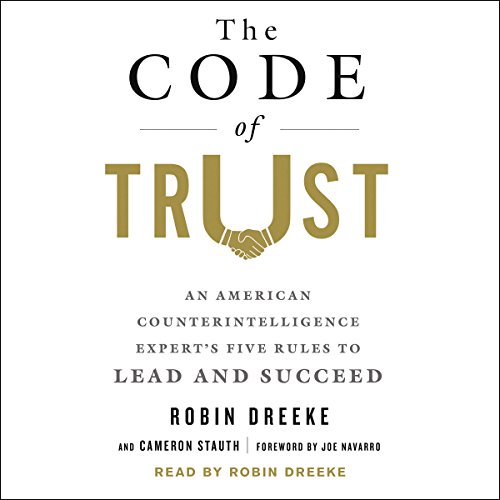 The Code of Trust

This audibook is read by the author, with a forward read by Joe Navarro. Robin Dreeke is a 28-year veteran of federal service, including the United States Naval Academy and the United States Marine Corps. He served most recently as a senior agent in the FBI, with 20 years of experience. He was, until recently, the head of the Counterintelligence Behavioral Analysis Program, where his primary mission was to thwart the efforts of foreign spies and to recruit American spies. His core approach in this mission was to inspire reasonable, well-founded trust among people who could provide valuable information.

The Code of Trust is based on the system Dreeke devised, tested, and implemented during years of fieldwork at the highest levels of national security. Applying his system first to himself, he rose up through federal law enforcement and then taught his system to law enforcement and military officials throughout the country, and later to private-sector clients. The Code of Trust has since elevated executives to leadership and changed the culture of entire companies, making them happier and more productive as morale soared.

Inspiring trust is not a trick, nor is it an arcane art. It's an important, character-building endeavor that requires only a sincere desire to be helpful and sensitive and the ambition to be more successful at work and at home. The Code of Trust is based on five simple principles:

1. Suspend Your Ego
2. Be Nonjudgmental
3. Honor Reason
4. Validate Others
5. Be Generous

To be successful with this system, a listener needs only the willingness to spend eight to 10 hours learning a method of trust-building that took Robin Dreeke almost a lifetime to create.

Story is great, reading can be improved

Not always is the author as good a reader as a writer. I get distracted easily by swallowed words, confusing intonation and sometimes blurry pronounciation. He has got potential, but I mean no offense in saying it doesn't work for me.