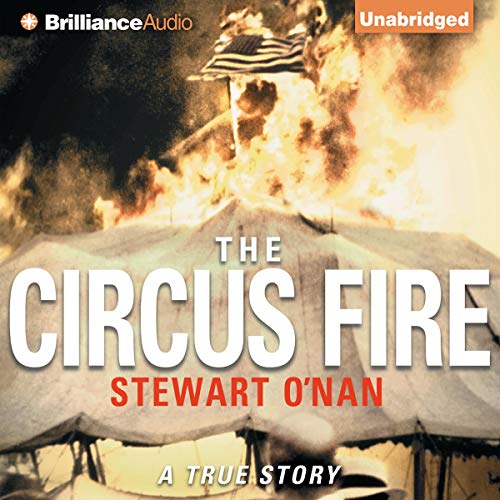 One of America's most acclaimed novelists turns to nonfiction in this powerful re-creation of the great Hartford circus fire, which took the lives of 167 people and forever changed the city and its people.

On July 6, 1944, in Hartford, Connecticut, the big top of Ringling Bros. Barnum & Bailey Circus caught fire during the middle of the afternoon performance. Nine thousand people were inside. The canvas of the big tent had been waterproofed with a mixture of paraffin and gasoline. In seconds, the big top was burning out of control. Bleacher seats were fronted by steel railings with narrow openings; the main exits were blocked by caged chutes in which leopards and lions were maddened by the fire.

In re-creating the horrific events of one of America's most cataclysmic civic tragedies, Stewart O'Nan has fashioned both an incomparably gripping narrative and a profound, measured glimpse into the extremes of human behavior under duress. In the madness of the inferno, some, like animal trainer May Kovar and the tragic Bill Curlee (who tossed dozens of children to safety over the lion's chute), would act with superhuman bravery. Others, like the sailor who broke a woman's jaw to get past her, would become beasts. The toll of the fire, and its circumstances, haunt Hartford to the present day - the identity of one young victim, known only as Little Miss 1565, remains an enduring mystery and a source of conflict in the city.

But it is the intense, detailed narrative - before, after, and especially during the panic under the burning tent - that will remain with listeners long after they finish this exceptional book.

"This moving elegy does tribute both to the terrible tragedy and to O'Nan's talent as a writer." ( Publishers Weekly)