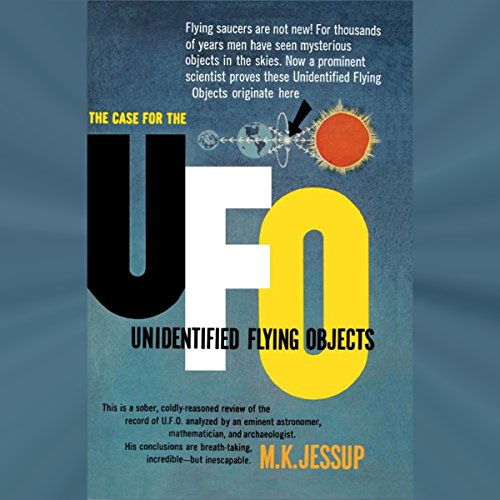 The Case for the UFO

This is the first ever reprint of the book that brought the entire legend of the Philadelphia Experiment into the public sphere, and created controversy for decades: The Case for the UFO! Why has this book been suppressed for so many years? It is a well-reasoned review of the UFO record by an eminent astromomer, mathematician, and archaeologist, Dr. M.K. Jessup. His conclusions are breathtaking and incredible, but inescapable.

Description from the original dust jacket:

Flying saucers are not new! For thousands of years, men have seen mysterious objects in the skies. Now, a prominent scientists proves that unidentified flying objects originate here, on Earth.

If you have ever wondered about the things today's scientists do not, will not, or cannot explain, this audiobook is for you. Such questions might be:

What is the hidden meaning of the comet's tail?

What caused the “Devil's Footprints” of Devonshire?

Why are we wrong to think of space flight only in terms of rocket power?

How was a soldier “teleported” from the Phillippine Islands to Mexico City within one hour?

How is acceleration achieved by UFOs?

What caused the disappearance of the crews of the SS Sea Bird and the Marie Celeste?

What is the strange truth hidden in the ancient ruins of Baalbek?

And finally, and most importantly: Are the UFOs friend, or foe?

This is the original edition of The Case for the UFO, which does not include the scrawled “annotations” of the infamous Carlos Allende (who may or may not have tormented Jessup into committing suicide). You will find this version much easier to understand than the Varo Edition, and probably much more meaningful.

Das sagen andere Hörer zu The Case for the UFO