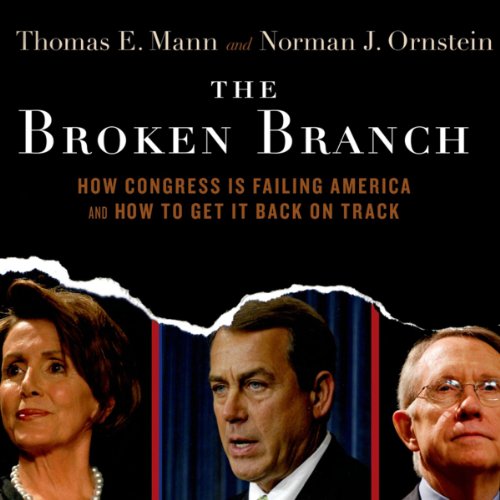 Congress is the first branch of government in the American system, write Thomas E. Mann and Norman J. Ornstein, but now it is a broken branch, damaged by partisan bickering and internal rancor. The Broken Branch offers both a brilliant diagnosis of the cause of Congressional decline and a much-needed blueprint for change, from two experts who understand politics and revere our institutions, but believe that Congress has become deeply dysfunctional. Mann and Ornstein, two of the nations most renowned and judicious scholars of government and politics, bring to light the historical roots of Congress's current maladies, examining 40 years of uninterrupted Democratic control of the House and the stunning midterm election victory of 1994 that propelled Republicans into the majority in both House and Senate. The byproduct of that long and grueling but ultimately successful Republican campaign, the authors reveal, was a weakened institution bitterly divided between the parties. They highlight the dramatic shift in Congress from a highly decentralized, committee-based institution into a much more regimented one in which party increasingly trumps committee. The resultant changes in the policy process - the demise of regular order, the decline of deliberation, and the weakening of our system of checks and balances - have all compromised the role of Congress in the American Constitutional system. Strong majority leadership in Congress, the authors conclude, led not to a vigorous exertion of congressional authority but to a general passivity in the face of executive power. A vivid portrait of an institution that has fallen far from the aspirations of our Founding Fathers, The Broken Branch highlights the costs of a malfunctioning Congress to national policymaking, and outlines what must be done to repair the damage.