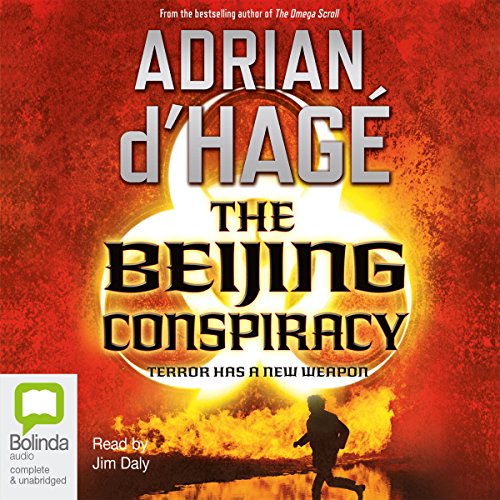 Veteran performer Jim Daly gets his mouth around a host of incongruous words - from physical descriptions of suntanned spy geniuses to shadowy al-Qaeda operatives - in this Robert Ludlumesque spy thriller about a Qaeda plot to devastate the human race with biological weapons and the two heroic Aussies who can stop it.

Written by Adrian d’Hage, a retired Brigadier in the Australian military, National Medal winner, and research scholar in Arab and Islamic Studies at the Australian National University, The Beijing Conspiracy charts a course from China to the White House to the lab. Fans of ticking clocks, near misses, renegade spies, and loaded codes won’t be displeased.

Fast-paced suspense and action-packed thriller, from the popular author of The Omega Scroll.

The countdown has begun... The message on the Al-Jazeera television network is chilling. Dr Muhammad Bashir, the mastermind behind some of al-Qaeda's most deadly bombings against the West and a close confidant of Osama Bin Laden, has warned of a single horrific biological attack on civilization. There is no cure for what al-Qaeda threatens to unleash, and there are no vaccines. The White House has dismissed the broadcast as scaremongering, and the President has reasserted his position that the West is winning the war on terror.

Denzel O'Connor, the CIA's most experienced counter-terrorism expert, knows the President is bluffing. Holly Braithwaite, a brilliant young Australian biochemist, has already revealed how a deadly super virus can be genetically engineered. Now, not only has Holly Braithwaite shattered the Presidential Administration's complacency, but several vials of the deadly viruses are missing. O'Connor suspects the vials have found their way into the hands of al-Qaeda - but where are they?

Bashir believes that the best place to unleash his final biological attack on a corrupt, materialistic and sexually depraved human race is a city which, for a short window of time, will attract millions of visitors who can take a super virus back to countless cities, towns and villages across the planet. His ultimate target: the Beijing Olympics.