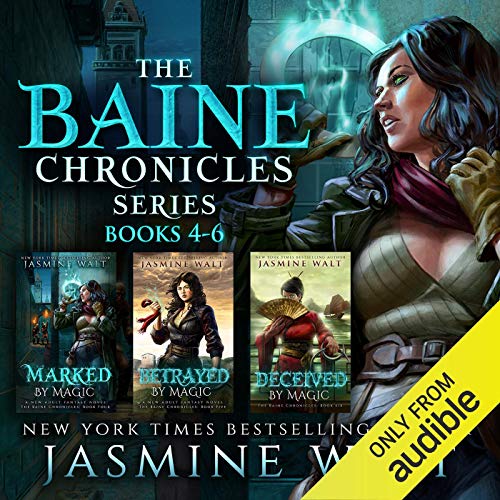 This is the boxed set of books 4-6 in the highly rated Baine Chronicles Series by New York Times best-selling author Jasmine Walt. This kick-ass urban fantasy series has been compared to books by Ilona Andrews, Patricia Briggs, Karen Marie Moning, and more. You're sure to enjoy it if you like spunky heroines, kick-ass fight scenes, wild new worlds, and sizzling, slow-building romance.

With the rebellion now in full swing, shifter-mage hybrid Sunaya Baine has no time for distractions. She must find out the true identity of the Benefactor and pull the plug on the Resistance's funding before they succeed in their grand plans for genocide and destruction.

But the heat is upon Sunaya now, and it demands to be sated. And since the Resistance has marked her for death, she can no longer walk freely among the very people she is trying to save. Death, danger, and desire hem Sunaya in on all sides, and with her friends caught up in their own problems, she cannot truly count on anyone except herself.

Does Sunaya have what it takes to wrangle her unruly shifter instincts and embrace her heritage as a mage once and for all? Or will she succumb to the forces around her and finally lose her way?

For most women, being newly engaged to the love of your life is a time of celebration. But Sunaya's happiness is overshadowed by loss. Her friends have not returned from their quest to bring back Noria, and though the Resistance has been beaten back, they are far from vanquished.

When the Minister sends Sunaya and Iannis to destroy an important Resistance stronghold, Sunaya is torn between the desire to help her friends and defend her country. But soon she finds that the two are not as unrelated as she imagined... and in order to accomplish both, she must put her trust in a man who has betrayed her.

If Sunaya and Iannis thought there would be time to rest after returning from their last mission, they are sorely mistaken. The Minister sends them to face off with yet more dangerous enemies - this time in a lawless port in remote Garai, where pirates and slavers thrive, and everyone is fair game.

To hide their undercover mission, Sunaya and Iannis travel to Garai as official guests to a state funeral. But Sunaya's luck runs out when she finds out her father is on the guest list and, worse, runs straight into him and his family. For now her deadly secret is safe. But once they discover her true identity, they may not be willing to suffer her alive....

Additional books in the series that are not included in this set: