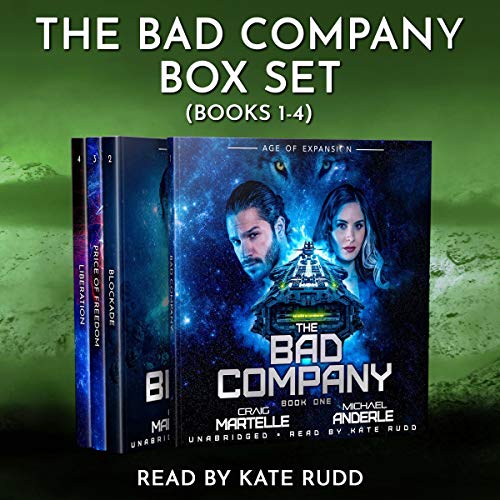 Grab this boxed set collection of the first 4 books in the Bad Company series today!

Space is a dangerous place, even for the wary, especially for the unprepared. The aliens have no idea.

Colonel Terry Henry Walton takes his warriors into battle, for a price, in this first installment of The Bad Company. He believes in the moral high ground and is happy getting paid for his role in securing it.

Join them as they fight their way across Tissikinnon Four where none of the warring parties were what they expected.

When the Bad Company learns of a human colony blockaded by aliens, they take the upgraded War Axe into battle. Once again, nothing is as it seems, but this time, they find a single enemy, evil to its core.

Ending that threat is a cause they are willing to die for. What would you do?

Terry and Char, take the Bad Company’s Direct Action Branch into combat to rid a world beyond the borders of a new incursion. All it will cost is the inhabitants’ most advanced technology, a miniaturized power supply that will revolutionize the Etheric Federation.

Join Terry and Char as the War Axe delivers the team to a planet well outside of Federation space where they have to convince the local aliens that the Bad Company is from the government and they’re there to help.

Join the Bad Company as they fight an enemy from their worst nightmares.

When humanity is wronged by the alien AI, the Bad Company leaps to action, but only after the warriors have scattered to the four corners of the galaxy. Nothing like liberty to keep the Bad Company happy and the credits flowing, just like cheap beer.

A side trip to Earth. Vacation on Yol. Meeting a lawyer on Onyx Station. Nothing is outside the realm of possibility as the Bad Company takes much-needed time off.

When the warriors return, they find their ranks bolstered, their weapons upgraded, and their fleet has grown. What they don’t find is the enemy.

The search is on! Between the Bad Company and their target stands too many innocent lives. Join Terry and Char as they confront Ten, a galactic evil....

Join the Bad Company as they fight an enemy from their worst nightmares.

Note: If cursing is a problem, then this might not be for you.