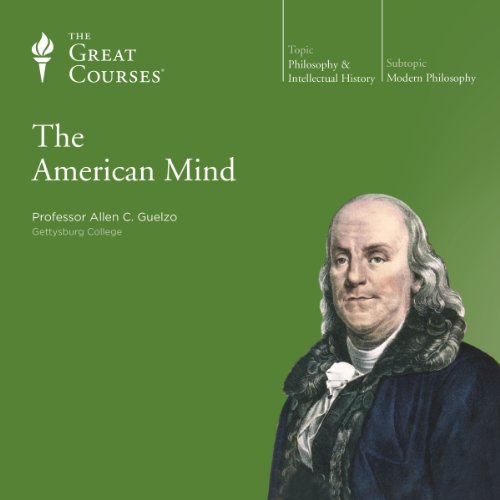 Americans pride themselves on being doers rather than thinkers, but ideas are at the very root of what it means to be an American. Behind this nation's diverse views on religion, education, social equality, democracy, and other vital issues is a long-running intellectual debate about the right ordering of the human, natural, and divine worlds.

Indeed, America is an enduring hotbed of ideas. Such great thinkers as Jonathan Edwards, Thomas Jefferson, Abraham Lincoln, William James, Martin Luther King, Jr., and many others engaged in lively and often contentious debate that helped mold America's institutions and attitudes. This immensely stimulating conversation made the United States what it is today - and provides the subject for these 36 fascinating lectures.

In this course, you will delve deeply into the philosophical underpinnings of the nation, forged by the Puritans and the leaders of the American Revolution. You will also explore many other aspects of the elaborate structure that became modern America, tracing ideas in politics, religion, education, philosophy, psychology, anthropology, literature, social theory, and science - proving that Americans have a much richer intellectual tradition than generally imagined. You'll learn about such philosophical movements as transcendentalism, pragmatism, and conservatism. You'll study the transatlantic philosophy of the Puritans, the spiritual revival of the Great Awakening, and the passion for reason sparked by the Enlightenment. And you'll trace the origin and evolution of America's colleges, which have served as a battleground of ideas, sometimes in an almost literal sense.