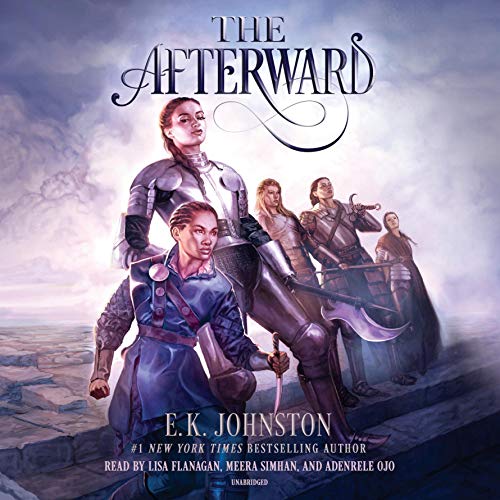 "I love this book so very much." (Robin LaFevers, New York Times best-selling author of the His Fair Assassin trilogy)

Romantic high fantasy from the best-selling author of Star Wars: Ahsoka and Exit, Pursued by a Bear.

It's been a year since the mysterious godsgem cured Cadrium's king and ushered in what promised to be a new golden age. The heroes who brought home the gem are renowned in story and song, but for two fellows on the quest, peace and prosperity don't come easily.

Apprentice Knight Kalanthe Ironheart wasn't meant for heroism so early in life, and while she has no intention of giving up the notoriety she's earned, reputation doesn't pay her bills. Kalanthe may be forced to betray not her kingdom or her friends, but her own heart as she seeks a stable future for herself and those she loves.

Olsa Rhetsdaughter was never meant for heroism at all. Beggar and thief, she lived hand-to-mouth on the streets until fortune - or fate - pulled her into Kalanthe's orbit. Now, she's reluctant to leave it. Even more alarmingly, her fame has made her profession difficult, and a choice between poverty and the noose isn't much of a choice at all.

Both girls think their paths are laid out, but the godsgem isn't quite done with them, and that new golden age isn't a sure thing yet.

In a tale both sweepingly epic and intensely personal, Kalanthe and Olsa fight to maintain their newfound independence and to find their way back to each other.

“The Afterward features a band of lady knights, a lovely F/F romance, and a unique look at what happens after the heroes save the world. High fantasy lovers, you’ll love this.” (Julie C. Dao, author of Forest of a Thousand Lanterns)

"Absolutely delightful. The Afterward is a queer fantasy that evokes series like The Belgariad and The Mallorean but puts a modern twist on them. I adored everything about this book." (Shaun David Hutchinson, author of We Are the Ants)

"Both the world-building and the LGBTQ romance are well done and appealing.... Delightful." (SLJ, starred)

I enjoyed the high fantasy setting and the imaginative story. The relationship between Olsa and Calenthy gave me all the feels in a good way!