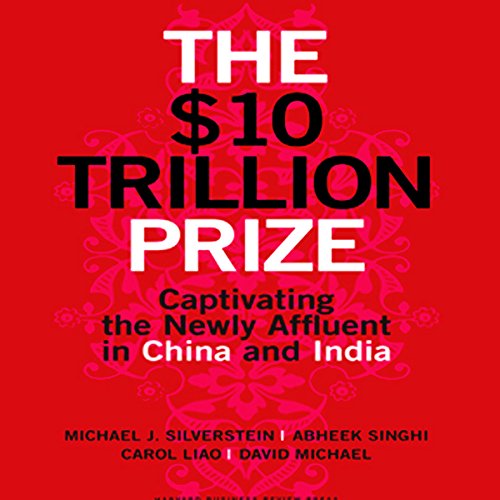 You've heard of the burgeoning consumer markets in China and India that are driving the world economy. But do you know enough about these new consumers to convert them into customers?

Do you know that:

In The $10 Trillion Prize, bestselling author Michael J. Silverstein and The Boston Consulting Group colleagues in China and India provide the first comprehensive profile of the emerging middle class, primed to transform the global marketplace. Already the worlds biggest buyers of cars, mobile phones, appliances, and more, these consumers are eager for more products and services. In fact, it's estimated that by 2020, consumers in China and India will generate about $10 trillion of total annual revenue for companies selling to them.

Only by fully comprehending the forces driving this new generation of consumers will your company be able to capitalize on the opportunities their buying power represents. Insightful and backed by rigorous research, this audiobook takes you inside the hearts and minds of today’s emerging Chinese and Indian consumers positioning your company to win as the next wave of global affluence reaches the marketplace.

".…the authors, all of whom work for the Boston Consulting Group, make a convincing case for the importance of this eastward shift in global spending." ( The Financial Times)