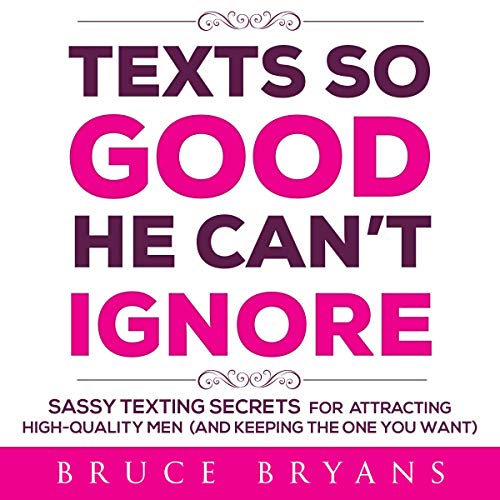 Texts So Good He Can't Ignore: Sassy Texting Secrets for Attracting High-Quality Men (and Keeping the One You Want)

Texts So Good He Can't Ignore: Sassy Texting Secrets for Attracting High-Quality Men (and Keeping the One You Want)

Did you know that men secretly use texting as a way to "pre-screen" a woman’s romantic value? A woman’s texting habits can reveal a lot about her self-worth, confidence, intelligence, and even her level of class and emotional maturity.

Because guys covertly appraise a woman’s relationship potential this way, many women often have no idea that the way they communicate via text is actually sending the wrong message and thus, they unknowingly end up chasing men away.

But with this insightful dating audiobook, you’ll learn the texting habits used by high-value women and gain access to a vast collection of irresistible, man-melting text messages that make men EAGER to text you back and desperate to see you again. And because this in-depth guide focuses on how men think, it will give you a distinct advantage over your peers when it comes to texting men.

Inside this audiobook, you’re going to learn:

Get started right away and discover how to text a man to finally get him OFF of his smartphone and ON more dates with you.